The Celebrating David Bowie concert tour made a stop in downtown Los Angeles, February 28 at the historic Wiltern Theater. The show features a core band of veteran rockers many of who performed and recorded over the years with David Bowie. The 2018 tour, which is in the middle of it’s run, offers a unique concert at every city it visits, by employing famous pop singers who live nearby. Obviously, there was no shortage of talent to choose from in the Los Angeles area, and seven well-known singers showed up to share in the celebration, which featured 26 Bowie classics. 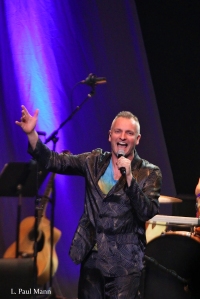 The Wiltern is one of the most elegant venues in Los Angeles with ticket and bar prices to match. The theater, built in 1931, was designed by architect Stiles O. Clements of Morgan, Walls & Clements, the city’s oldest architectural firm. The Wiltern was initially envisioned as a vaudeville theater and first opened as the Warner Brothers Western Theater, the flagship location for the theater chain. The Los Angeles chapter of the American Theater Organ Enthusiasts worked to restore the theater’s magnificent Kimball pipe organ, one the largest one in Los Angeles. The theater was abandoned int eh 1970’s and was slated for demolition before a group of local preservationists worked to save it. The 2,300 capacity theater was packed for the February 28th show, with many fans lining up hours before the doors open to enter the theater early. With 55 dollar valet parking and 17 dollar beers at the bar, a night at the Wiltern can be an expensive venture. But the fans of David Bowie’s music filled the theater despite the expense for a unique evening full of classic tunes.

The core touring band featured veteran musicians. Mike Garson, an American pianist, who has worked with David Bowie, Nine Inch Nails, Billy Corgan and The Smashing Pumpkins, among others, was the first to take the stage. He acted as the master of ceremonies for most of the night introducing the various performers and even taking on lead vocal duties on occasion. The animated guitarist Earl Slick brought a hard rock vibe to the show. Slick is perhaps best known for his collaborations with David Bowie, John Lennon, Yoko Ono, and Robert Smith. Gerry Leonard was equally impressive on lead guitar, even if not as emotive as Slick. Leonard, an Irish guitarist is best known for his longtime collaboration with David Bowie. Bassist Carmine Rojas, who also collaborated with Bowie, brought an R&B/funk, and jazz vibe to the mix. Earl Slick’s son, Lee Madeloni played drums for the band. Gaby Moreno, a Guatemalan singer-songwriter, and guitarist sang backing vocals and brought a blues, jazz, soul and R&B influence to the group.

Regular singers on and off the tour included; Bernard Fowler, Joe Sumner, Mr.Hudson, Corey Glover and Sass Jordan. Fowler has been a backup singer on a seemingly endless list of classic rock albums. Sumner is the singing prodigy of Sting. Mr. Hudson, a British musician from Birmingham, England, is a well known contemporary vocalist Sass Jordan, a British-born Canadian rock singer from Montreal, was the sole female lead singer to appear at the Wiltern show. Corey Glover from In Living Colour has also been a regular on tour. If there wasn’t already enough vocal talent on the bill, there were two surprise guest singers for the evening. Perry Farrell, lead singer of Janes Addiction, made an inspiring appearance. Also, Fantastic Negrito, an African-American singer-songwriter whose music includes blues, R&B, and roots music was a surprise guest. 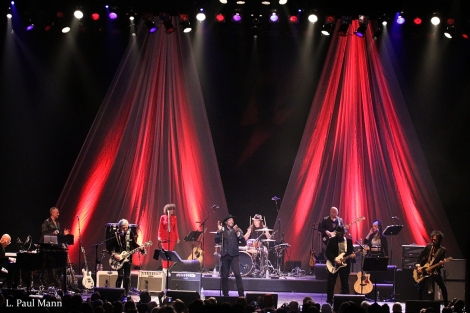 As the singers took turns belting out David Bowie’s biggest hits, the crowd became more enthusiastic throughout the night, and most spent the second half of the set singing and dancing on their feet. By the time the group played a five-song encore, nearly everyone in the audience had no doubt had heard a rendition of their favorite Bowie song.