Photos and Article by L. Paul Mann {More photos at the bottom)

During one of the best evenings of live music in Santa Barbara this summer, three innovative groups of musicians brought their immense talents to the Santa Barbara Bowl. The July 7th concert took place on a sweltering evening with a nearly full moon hanging above the hillside amphitheater.

The show began early with an acoustic set by Exene Cervenka and John Doe. The talented team of singer-songwriters are the heart of the seminal Los Angeles punk rock band X. Together with Guitarist extraordinaire, the ever smiling Billy Zoom and drummer DJ Bonebrake, X became a powerhouse band with something to say. The group emerged at the forefront of the West Coast punk rock movement in 1977 and by the 1980’s was a lead innovator of the genre. The pair has experimented with other projects before. This included the band the Knitters, which was a decidedly more folksy and countryesque approach to music than the hardcore punk of X. But, at the bowl as an acoustic duo all dressed in black, the pair took on a broad range of musical genres. Doe strummed a guitar, and the two sang haunting duets, including some of the brilliant songs that the two wrote for X. While most Los Angeles punk bands that were the peers of X, engaged in basic primordial lyrics, Doe and Cervenka wrote increasingly poetic and introspective songs mostly about life in the inner city. The brilliant lyrics were on display at the Bowl show as the band played a set sprinkled with X classics, as well as a nod to Americana, with a George Jones cover and other folksy gems. As is usually the case with a Bowl concert many of the music fans coming to the nearly sold out show had yet to arrive for the opening act, but the fans that were in place responded enthusiastically to the short acoustic set. X played Santa Barbara numerous times in the 1980’s and played their last headline show at the Santa Barbara Bowl over thirty years ago. The band is now in the midst of their 40th-anniversary tour with dates across the country through the end of September. 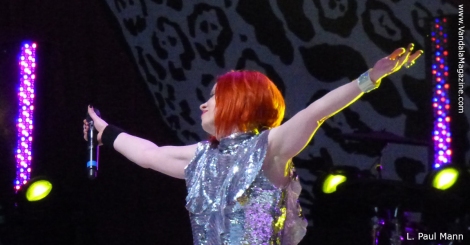 As the hot summer sun began to set, the spectacular view of the Pacific Ocean and the city of Santa Barbara below the amphitheater took on a surreal orange glow. By the time the band Garbage sauntered onto the stage, most of the audience had finally arrived. Fans of the edgy Indie rock band from Madison Wisconsin rushed to the front of the stage, ignoring the usual stodgy crowd at the upscale venue, who regularly chastise enthusiastic music fans to sit in their seats. It was great to see older music fans exhibit such excitement. Garbage was founded in 1993 by drummer Butch Vig, who had already achieved massive success as the producer of two seminal grunge albums, The Smashing Pumpkins Gish and Nirvana’s Nevermind. Vig teamed up with young, charismatic Scottish singer Shirley Manson and added American musicians Duke Erikson on bass, rhythm guitar and keyboards, and Steve Marker on lead guitar. The band emerged as innovators in the grunge era with a more sophisticated sound and propelled by the persona of the sexy young vocalist, Manson. Their first album was a surprise hit selling over 4 million albums. The band first appeared in Santa Barbara in the 90’s at the 18 West concert venue, now Dargan’s Irish Pub. The venue would roll open a side garage door to cool the audience and allow for a free show for passers-by. Inside, the oversold crowd sweltered waiting for the band, the largest audience for any show at the short-lived venue. 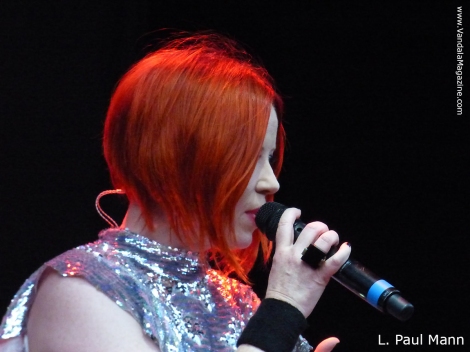 Many of those same fans may have been some of those swarming the stage as Manson, in a shimmering silver dress, broke into her first song of the set. The band opened with a new song, No Horses, but quickly segued into a song from their album, Garbage, entitled, Queer. The band tore through that hit song, as well as all the most popular songs from that debut album during the 15 song set. As the veteran rockers played their intricate tunes, Manson worked the crowd repeatedly reaching out to the adulate fans. The engaging singer gave repeated homage to openers Excene and John Doe and idolizing headliner Blondie in acknowledgments to the headliners. As evening fell, the band seemed to become larger than life with sound levels increasing to allow for a more intense rock experience. By the time the band played their final song, the crowd in the nearly full venue were mostly on their feet in full dance mode. 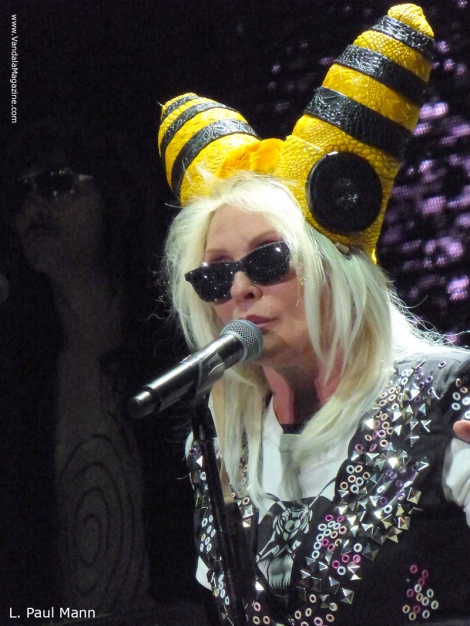 As evening fell temperatures finally began to moderate and many in the sweaty crowd headed to the bar. But as Blondie, the legendary punk rock band from New York took the stage, the large crowd rushed back into the venue to swarm the stage. While X was helping to establish the forefront of the punk music explosion on the West Coast, Blondie had already experimented in the genre on the West Coast. By the spring of 1975, singer Deborah Harry and guitarist Chris Stein had established Blondie as a regular fixture at the CBGB nightclub in New York. Stein and Harry added drummer Clem Burke and bass player Gary Valentine. This new Rage and Raptures tour featured three of those original members, Harry, Stein, and Burke. Many other veteran musicians have come and gone from the band in its later years, but the current tour adds Bassist Leigh Foxx who has played with the group since 1997, Matt Katz-Bohen on keyboards, and young guitar master Tommy Kessler. The band opened with a raucous version of one of their biggest hits One Way or Another from their 1978 album Parallel Lines. The band rocked in from of a large LED screen looking a bit like the old Outer Limits television show with a snowy static looking screen. Harry, the iconic lead singer, appeared onstage sporting a giant bumble bee hat, bumble bee shirt, and bumble bee pendant, and launched into crisp, clear vocals instantly. The singer’s strikingly good looks remain intact, and the blonde sex symbol of the 70’s could pass for a woman half of her 72 plus years or even younger. Her irreverent wit and spirit also seemed to remain intact, sporting a cape that read “Stop Fucking The Planet.” The band tore through some of their biggest hit songs in a 13 song set, with visuals ranging from vintage footage of the band to spacey graphics more associated with an EDM concert. Kessler added a fresh layer of explosive guitar playing including acrobatic antics that included an old Hendrix trick of playing the instrument behind the head. He meshed well with the original band who laid down the time-tested rhythms perfectly. The only sour note of the four-hour evening of great music was when an obviously miffed Harry emerged from behind the stage at the end of the set. She used some expletives to describe the silly 10 PM curfew at the Santa Barbara Bowl and then proceeded to launch into the last two songs of the set, including a powerful version of “Heart of Glass.” Checking the tour on the official setlist.fm revealed a sad fact. It seemed that the dreaded curfew cost the fans at the Santa Barbara venue a two song encore which included the gems, Maria and Dreaming. But all in all, it was a thrilling night of classic tunes. 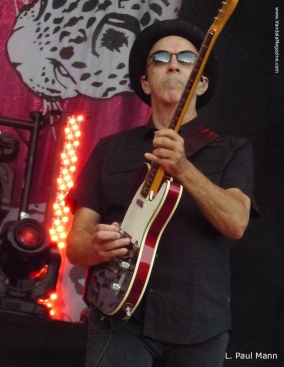 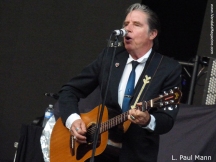 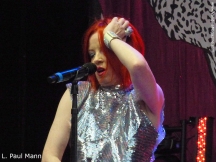 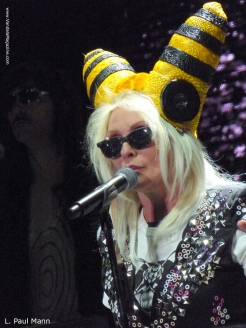 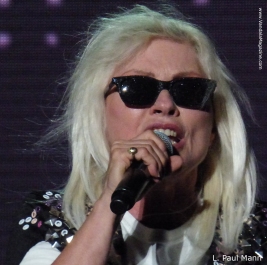 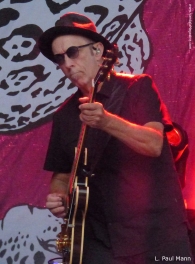 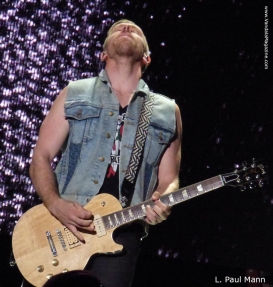