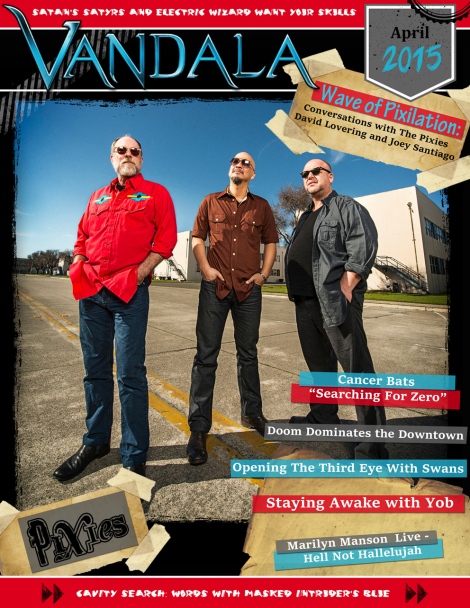 Aprils edition brings a little bit of everything. The cover is a double feature with interviews with David Lovering and Joey Santiago of the Pixies. We also caught up with the unidentifiable Blue of Masked Intruder. Plus we spoke with metallers Yob for an interview. Also live music seems to be roaring all over North America with a ton of tours and upcoming ones and of course we are out there. Vandala hit shows from Shock Rocker Marilyn Manson to Delta Blues icon Harry Manx complete with reviews and photos. This and much more in this months Vandala Magazine.   READ HERE 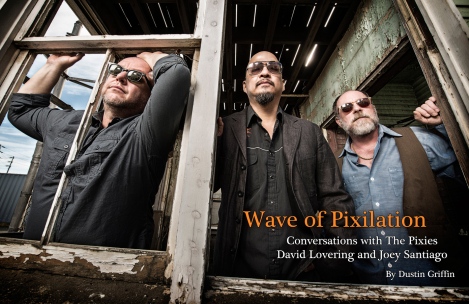 Undoubtedly one of the most influential bands of the 90’s, The Pixies have been making waves and headliners the last ten years with renewed activity, including a new album (‘Indie Cindy’) and a continuous, and sold out, touring schedule all over the world.

With an east coast run about to kick off in Memphis on May 1st, we spoke with drummer and guitarist, and founding members, David Lovering and Joey Santiago about the Pixies past, present and future. READ FULL INTERVIEW ON PAGE 50

Masked Intruder are a band of convicts from Wisconsin. They’re known for their poppy, catchy hooks and sunny songs of love, life and crime in and out of the Big House, as well as for their color coordination. Each member, Blue, Red, Yellow and Green, has matching shoes, instruments and ski masks. And while their true identity may never be known, even by them, they’ve gathered an impressive following for a band so recently released from incarceration.

They’re about to hit the road with Strung Out, which includes a cross Canada run. I gave Blue a call in an undisclosed location to discuss the tour, the fans and, of course, prison.  READ FULL INTERVIEW ON PAGE 42

Mike Scheidt is a cosmic dude and he has some pretty fascinating views about the nature of reality as well as what doom metal means in a larger context. In an in depth interview we get to see Scheidy at his absolute finest, shooting the shit about what he loves.   STARTS ON PAGE 62 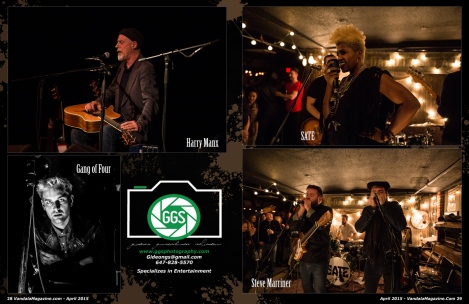