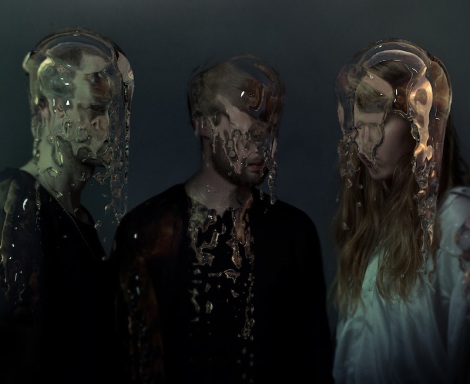 The hybrid trio is formed of the most influential and prolific bands in Reykjavik, Icleand; Sin Fang’s Sindri Már Sigfússon, Samaris’ Jófríður Ákadóttir and Oyama’s Úlfur Alexander Einarsson.  First appearing like an apparition in the Soundcloud cosmos with ‘Fuck With Someone Else’ and after revealing only 3 songs, they have been streamed over 1,200,000 times across Spotify, Youtube and Soundcloud. Their mysterious debut came in the form of an anonymously sent video featuring a metallic face emerging from a coppery sea, accompanied by a disembodied, pitch-shifted voice.

All of GANGLY’s tracks contain a sense of reserve and composure: they’re catchy, but unhurried, and each features sharp-eyed, meticulous production. “What I love about these slow jam pop songs we make is having a simple melody, that touches some strings,” says Úlfur. “I like to think about the spaces where one line ends and the next begins. That’s a very powerful space.”

“Holy Grounds” and “Blow Out” invite you further into their intriguing universe with. “All the songs exist in the same made-up world,” says Úlfur. “It’s not exactly a narrative — each one stands alone — but there’s a theme there. Heartbreak, maybe. Loneliness, and the difficulty of human relationships.”

“Whole Again” is a warm and intimate song arrived from Jófríður almost finished, then Úlfur and Sindri wrote lyrics for another verse. “I interpret the song as being about sheltering a loved one who has a broken wing,” Úlfur explains, “just trying to help them survive. I think it’s one of the most beautiful lyrics she has written.”

Jófríður originally wrote the song in Los Angeles, about a troubled relative. “I think the lyrics do most of the talking for themselves,” she says. “It’s a very sweet song about caring for someone.”

The song was finished and produced collaboratively, across a long distance, as is often the case for the regularly touring, multi-tasking members of GANGLY. “I think that the distance helps us,” says Jófríður, “the fact that we’re all working on our own, then we come together to strengthen each other’s work. My favourite thing about GANGLY is the total freedom we have, within the band’s aesthetic.”

The fourth track ‘Drowning’ is “dark, and bleak, but with some hope at the end of the tunnel. “Úlfur finishes. ”I’m excited to take the next steps. We won’t stay in this lonely chrome world forever.”