By L. Paul Mann {More Photos at the Bottom}

Jean Michel Jarre, a French pioneer in electronic music and a true living legend in the world of pop music, gave his first live performance in Los Angeles as part of his first tour of the United States ever, at the Microsoft Theater, Saturday, May 27. Jarre is famous worldwide for his live performances and has drawn the largest crowd ever for a live performance, with an estimated three and a half million in attendance at a Moscow concert. His performances are usually unique events taking place at historical sites, involving massive multimedia synchronizations to the music, including fireworks and state of the art lighting. His outdoor live events across the world usually draw crowds in excess f one million people. His two latest outdoor spectacles included a concert near the ancient fortress of Masada in Israel, as a benefit to help preserve the Dead Sea. He also performed a concert for the opening of the Jubilee year at the Monasterio de Santo Toribio de Liébana, in Spain. 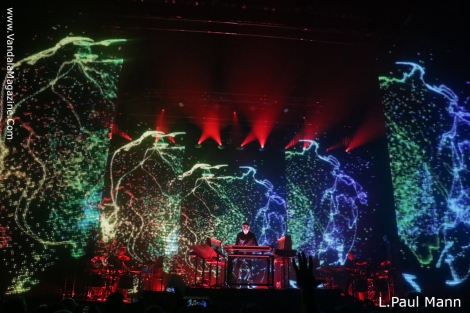 Jarre had only played once before during his 50-year career in the United States as part of the celebration of the 150th anniversary of Texas, and the 25th anniversary of NASA, in 1986. The one and only indoor mini tour of a few select cities in the US made its way to the Microsoft Theater in the massive LA Live complex which also includes the larger Staples Center.

The May 27 show featured a two hour set of 24 tracks synchronized to one of the most sophisticated light, laser and multimedia show ever imagined. Outside the venue, music fans lingered in the Memorial Day weekend sunshine comparing stories regarding their idol the elusive Jarre. It was evident from the many accents and languages in the cacophony of conversations that the French musical genius has a worldwide following. The concert, coming on the heels of the Manchester bombing also showed signs of a new normal in an apprehensive atmosphere. The main entrance to LA Live was blocked off with traffic being rerouted to the back. I addition to an increased security presence, bomb-sniffing dogs could be seen patrolling the area.

But none of this deterred from the excitement of the unique live event. After an opening 30 minute set by an electronica DJ, the crowd settled in for the spectacle. Inexplicably, there were more than few empty seats in the house, but that did not stop Jarre from presenting a spectacular show. Flanked by two talented musicians, each playing drums, and keyboards, Jare appeared on a platform in front of a myriad of keyboards. Multiple layers of LED light walls began morphing around him creating a multidimensional vision of lights and graphics. Huge lights and myriad colored lasers were also incorporated in the show; all carefully choreographed to the music. The result was a spectacular display that even EDM artist Deadmau5, famous for his live presentations, would acknowledge unprecedented in its unique brilliance. In fact, the giant EDM music festivals, so reliant on massive visual presentations today, owe their evolution directly to Jarre’s original live performance vision. Jarre became known to the pop music world back in 1976 with his breakthrough electronica album, Oxygene. He was a pioneer of the genre along with Giorgio Moroder from Italy and Kraftwerk and Tangerine Dream in Germany. But what made Jarre unique among his peers was his vision of live performances with gigantic state of the art multimedia displays unmatched in the concert world.

At the show May 27, Jarre showcased new music from his two-part LP Electronica and most recent release Oxygene, alongside classic material from breakthrough albums such as Oxygene and Equinoxe. One of the many collaborators on the Electronica album, local Los Angeles transplant, Gary Numan, could be seen beaming in the audience. The most political moment of the night came during the sixth song of the set, Exit, Jarre dedicated the song to his friend Edward Snowden. Large media clips of Snowden were played during the song espousing the public’s right to privacy from government oversight. On the eighth song, Conquistador, Jarre broke into an electric guitar solo showcasing his rock talents. Jarre even played an iPad on the song, Immortals, late in the set.

But the most spectacular perforce of the evening came during the last song of the standard set, The Time Machine when Jarre played the Laser Harp. As large green lasers shot straight into the sky, Jarre donned special gloves and played the rocketing beams like strings on a harp. {See a music video from January below}

Jarre returned to thank the crowd passionately and introduced his two bandmates. The trio then proceeded to play three triumphant encores to the delight of an adoring audience. Let’s hope we don’t have to wait another 50 years to have the musical genius of Jean Michel-Jarre grace our shores again. 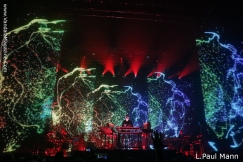