Photos and Article by L. Paul Mann
Photo Gallery at the Bottom
Read More Reviews in Vandala Magazine For FREE

A youthful crowd gathered early on a balmy fall evening at the elegant Arlington Theater in downtown Santa Barbara on Tuesday, October 18.  As hot Santa Ana winds blew through the historic courtyards of the venue, the mostly millennial crowd sipped a variety of beverages to keep cool.

There was great anticipation in the air as the crowd eventually made their way to their seats, just before the start of a moody electronica-drenched set by English singer-songwriter James Blake. The 29-year-old singer has made quite a splash with his hypnotic mix of beautiful R&B inspired vocals and post-dubstep electronica. Blake is the son of English musician James Litherland, who is an English singer and guitarist best known as a founding member of the progressive rock band Colosseum. That band was one of the first bands to fuse jazz, rock & blues.

Blake is on tour supporting his third and latest album, The Color in Anything. The young keyboard player with an angelic voice took the stage with his band mates Ben Assiter on drums and Rob McAndrews on guitar and sampler. The three laid down a set of moody melancholy songs, drenched in electronic sampling. The band was awash in a multimedia light and video show, set in dark rich colors and geometric graphics synched perfectly with the music. With some songs sounding reminiscent of a demure and depressing Portishead, the singer struck a somber chord. But many in the crowd found other songs in the set, steeped in EDM backbeats, to be inspiring towards a more uplifting dance trance. 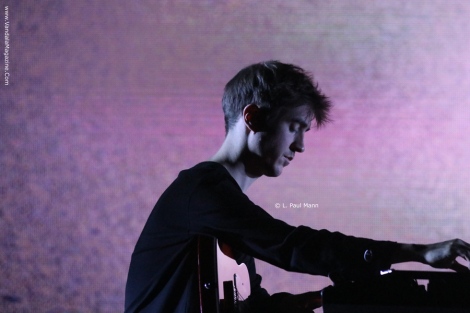 The trio began with a song from the new album, “Always.” The audience came out of their seats as Blake played one of his most well-known hits next “Life Round Here” while lights flashed and the video presentation transformed the venue into an ethereal setting. The colors on stage changed yet again and the hypnotic sounds of “Timeless” started to play, and then segued into the Feist cover, “A Limit To Your Love” from Blake’s past album Overgrown. That brought the crowd into the aisles with its deep dubstep beat. The band even managed to play a few pop music covers including, “Forward” by Beyonce and later in the encore a Joni Mitchell song “A Case of You.”

The 17 song set list flowed like an ocean tide from melancholy to dubstep dance moods throughout the evening, with a digital backdrop that transformed with each song, from a myriad of geometric shapes to a shadow of a bird fluttering its wings in orange lights before transforming into a swarm of butterflies. While the lyrics might have been heart wrenching, the blistering lights and synths created a trance inducing mood that made for a unique and unusual show.

The show was another great concert by Nederlander Concerts for more information on upcoming shows visit their website. http://www.nederlanderconcerts.com/ 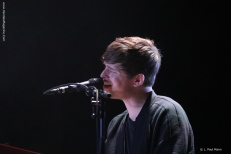