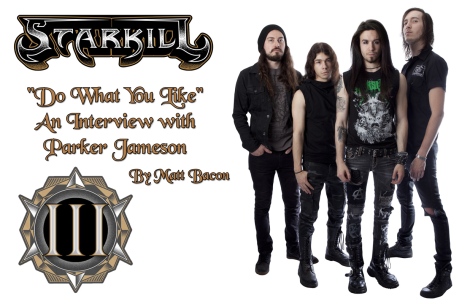 Parker Jameson of Starkill seems to be not fully over the fact that his band is doing so well and touring internationally. One of the most exciting acts out there right now, and Parker, with all his charm makes for a captivating interview.

So what’s going on with the new album?

Parker: I think most people who follow the Metal Injection, Blabbermouth world saw several months ago that Century Media got bought out. That’s not a secret. They’re like a subsidiary now. Basically a lot of the staff and people who were close with us at Century Media who we had been working with for years are gone. I don’t want to say too much because business is business but it’s different people now and a lot of bands are leaving. This has been our longest gap since being in the studio between records. Normally it’s 12-ish months. Every twelve months or so we’re in the studio. We had the choice between switching labels or trying to crowd fund the upfront costs. When you don’t own your own music it makes profiting off it impossible so if we can fund it then we are going to make a ton more money off of our stuff. It’s not all about the money but it’s about being able to scrape by. I like to be able to scrape by. We’ve had to turn down a couple of huge European tours for that reason because we couldn’t get the money we needed. So f*ck it, we’re going to crowd fund it and that will keep us on the road way longer. It’s been a big progression for us.

So you’re not putting out via Century Media, or are they distributing it?

Parker: We are recording and distributing it ourselves and we are looking into companies that will help distribute it but give us rights.

Obviously the interview to leave Century Media is kind of scary…

Parker: Exactly. The overhead costs of recording an album are frightening, you have all the costs of a producer and studio and are also taking a month off of work to work twelve to eighteen hours days to work on this stuff, plus PR and advertising. I think we can meet the goal and even if we don’t we can take some time off. The appeal to owning your own music is too big of a thing to not have after doing this for four years. A lot of bands have been doing it. Owning our own music is our biggest priority right now. We’re still a young band, our drummer is only twenty one.

Now that you’re outside the label structure how have you been able to get on tours like this?

Parker: Compatibility. We have been offered tours with Moonspell before, that was one of the ones that we had to turn down because we couldn’t get the money to get to Europe. When we came here it was a predetermined match and they were buddies with other bands that we’ve toured with. This is the first show and we’re playing new material and we get to play some bigger venues with the new guys.

Have you been doing this all on your own… or is there a manager?

Parker: We’ve had a new manager for about a year. The last one… I don’t want to get into it, but remember that this is our first band, for me and Spencer at least. When you’re young you have no idea how the music industry works. I think I had been to one metal show in my life but I had no insight. I loved the music, I genuinely did, but I had no clue how the scene worked. It made things a little bit complicated. Now we’re fixed. We have our feet on more solid ground. Doing things this way is going to help out a lot more.

Did you feel alienated from the scene at first?

Parker: Not really. I just play. My focus is being on stage and delivering a product. On our first big tour with Wintersun and Fleshgod Apocalypse I was out there every night – simply because this was a new experience for me – I had never been to a metal show before. I should be in the pit right now. I can remember being in the front row for Wintersun every night. I just dived into and I think people can feel the genuine enthusiasm.

I’m not really a metalhead, I just play metal music. I have an Avril Lavigne poster in my room!

What’s your relationship with Avril Lavigne?

Parker: I appreciate her songwriting. I feel like there are two types of metalheads. There’s the guys who listen to Necrophagist and super brutal shit and only listen to heavy music but then there’s those who can listen to normal stuff too. There’s talent behind top 40 songs. I think song structure is incredibly important and that you should be able to pull influence from anything from Avril Lavigne to Dark Funeral.

Does Avril Lavigne impact you musically?

Parker: Not consciously. But I’m a huge fan of choruses. Choruses are the shit, choruses and guitar solos. As long as we have some of those I am content. 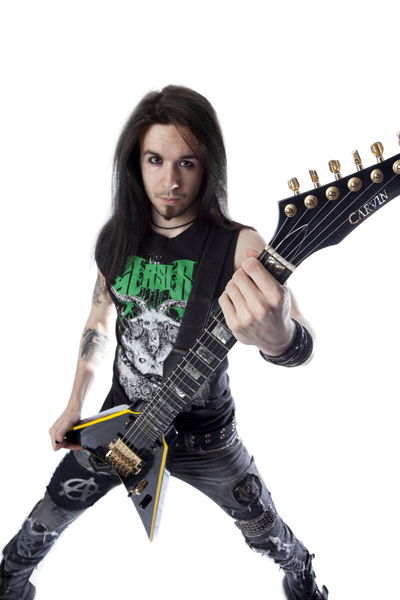 So China… how did that happen?

Parker: Our manager had Havok go to China. He knows a promoter and one of the magazines that’s really big in Shanghai and they do a circuit of regular shows and they don’t get bands all the time and there’s some local scene in each place but as far as touring stuff goes it’s not that big. They said if we could afford to get over there we could do it so we had a Chinese party for two and a half weeks. It was very different.

Culturally there was a tangible difference between the US and EU crowds and the Chinese crowds. We didn’t get a lot of culture shock in Europe. China was like stepping onto Mars. The little things like the way they walk and the distance they have between each other. Little things like that added up and made the experience new and weird and fun. We played Shanghai and two hundred people came out, not because they had heard of us but because we were a new metal band. When we played some of the smaller less Americanized cities we played a venue where dads in suits would come out and didn’t care that we played metal. People over there don’t care about the genre and they just go to see music and be non judgmental. They loved it for what it was and that was a really new concept. There were people who would show up in glasses and ties and be afraid that we were at the wrong venue but within four chords they got it and were moshing like crazy! There were no real social implications that metal was weird and scary, not like they could understand the lyrics anyway, because y’know, language barrier.

To what extent was the language barrier a problem?

Parker: We had a great tour manager and translator who helped us out a lot. Part of the reason why China worked was that unlike the European tours that would benefit us more in the long run was that you can get a hotel room for six dollars and eat for fifty cents. The trains were cheap too. That’s obviously not the case in Europe or the States. Shoutout to Painkiller Magazine for helping us out! They knew so much about us, so much stuff you couldn’t even Google. There was a lot of respect from people who had high roles.

I will say though that day one on this tour has been amazing. Everyone has been been around the block and is amazing This is the most comfortable first day I have ever had on a tour of the States for sure.

Now that Starkill is starting to get really established – where are you going to go from here?

Parker: I was talking to someone else earlier about this. When we first formed the band it was our ‘first band’ and at that point in time I hadn’t practiced singing with my clean vocals and had only heard of like ten metal bands so on that first record there’s a very prominent influence from a couple of those bands because that was all that I was listening too. I liked a lot of bands with cleans but I couldn’t do them. I very specifically made sure to write songs on the first record that would never need cleans. I didn’t want to go back and say “Shit I wish I did cleans” I think that our new record with huge clean vocals might have some people calling us sellouts – but actually we just really boxed ourselves in on the first record. On this new record there’s no boundaries or judgment. I’m not afraid to call out the influence of bands like All That Remains and Slipknot as well as the traditional stuff. It’s just like, “Here it is, deal with it” Now with the new guys in the band and their experience touring it’s a four person project versus a one person project which is what the first record was.

Parker: When I was ten years old we had a music day at our school and I picked up a saxophone and made notes and it was like ‘wow I can make sound’! It was purely coincidental that I could dick around on it. I just like being able to convey images and emotions in a sonic format. I’m not a very emotive person and I’m not a super big metalhead, I listen to Smash Mouth all the time. I like to shred down and get it out in that format. It’s all I like to do. I dropped out of college to do this, to scrape by and I love every f*cking second of it.

Any final words of wisdom for me?

Parker: Do what you like. Having done this for four years the more that we do what we like, the more we like what we do… I think that’s an Andrew WK lyric from Party Hard!
Help Starkill on their upcoming album by pre-ordering! www.indiegogo.com/projects/starkill-new-album#