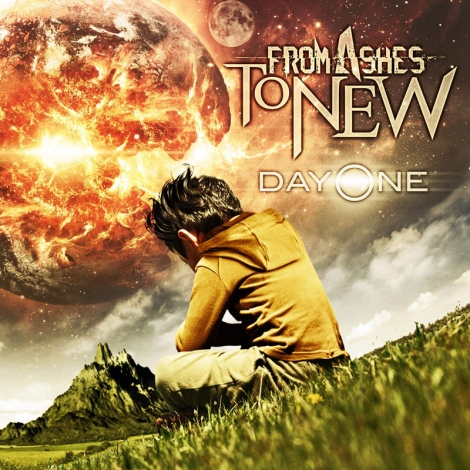 The comeback of the 1990’s Nu-Metal era has been boiling over the modern rock stove the past five years, as if a giant pot filled with nothing but past urban teenage angst finally decided to spew out from underneath today’s bullshit rock radio. That’s all because of the spark that slowly ignited beneath today’s pot of modern rock radio and turned into a giant flame of pissed off young adults that are currently sick of the radio being soft. These were the kids who grew up listening to Coal Chamber, P.O.D., and Slipknot. And they’re finally getting their own chance to shine within the music industry. Meaning, it’s safe to say Nu-Metal has officially returned for the better, but with a little more unique flavor thanks to the help of new music technology that’s so easily accessible today.

From Ashes To New’s debut album “Day One” finds the band fully embracing Hip-Hop and infusing it with slick metallic hardcore breakdowns, a mix of clean and harsh vocals, catchy arena rock hooks, solid guitar solos, and electronic elements that will remind some of what DJ Lethal brought to the table with Limp Bizkit’s 1999 release “Significant Other”. The electronic elements are there to create a distinctive atmospheric tone that meshes perfectly with the hard rocking riffs. The lyrics are built upon teen angst, but it doesn’t sound forced and surprisingly works really well for the band. Chris Muser’s vocals are powerful! His singing is infectious and is guaranteed to be stuck inside listener’s heads long after Day One is finished playing on their IPod.

Matt Brandyberry’s raps are effective and his Hip-Hop skills really shine on the track “Shadow” Matt’s raps are like a combination of Lil Wyte and Deuce of Hollywood Undead and that’s a major positive. His rhyming schemes and wordplay are both absolutely impressive.

Fans will be busting out their notepads and writing their very own lyrics after becoming inspired by Mr. Brandyberry’s originality. Overall, fans of Three Days Grace, Linkin Park, Dangerkids, and even Enter Shikari, will be beyond hooked with this debut. It’s a strong effort and will become a force to reckon with inside the mosh pit. Major highlights include, “Lost and Alone”, “Shadow”, “Breaking Now”, and “Face the Day”.