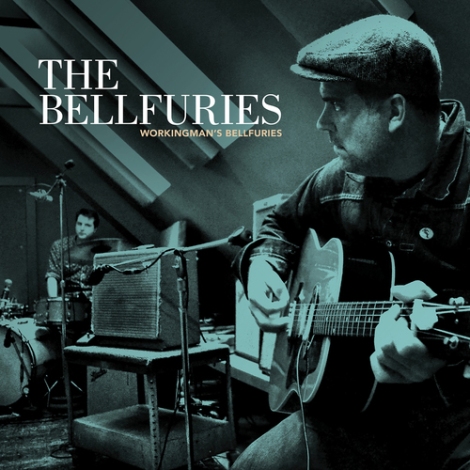 Call it revivalism, call it rockabilly, call it whatever you want, The Bellfuries create a racket that is both soulful and accurate to the time it emulates. Taking their cues from rock n’ roll’s greatest decade, they take the blueprint set out in the 50’s and infuse it with their own brand of sharp songwriting and refined instrumentalism.

The Bellfuries are from Austin Texas and the rich musical tapestry that is that city’s pulse is evident in their sound. Workingman’s Blues is their third studio album and is definitely the best example of the sound they’ve been working at since their formation.

Lead off track ‘Loving Arms’ is a bouncy little chugger with a killer hook and some great guitar work.

‘Make The Mystery No More’ and ‘Letter To My Maybe Baby’ use first wave country to paint a picture of love and longing that are a nice stopgap between the bookends of the record.

‘Beaumont Blues’ is the kind of rockabilly Sun Records was pumping out with aplomb in the wake of Elvis Presley and it captures that time and sound perfectly in its three and a half minutes.

‘She’s A Woman’ is my favourite track on the album. It’s got a driving beat and sounds in the best way like With The Beatles era Beatles. Vocalist Joey Simeone yelps at the mic with passion and fury, while the rest of the band (bassist Jeff Seaver, guitarist Mike Molnar and drummer Chris Sensat) keep the backbone sharp and piercing throughout.

‘Under The Light of the Moon’ is a nice track about moonlit love and is a nice soft lead in to another of the record’s barnstormers in ‘Baltimore’, a blitzing rocker that was built to rattle floors and hammer heels.

Finally, ‘An Illusion Believed’ is a beautiful track for rainy days that is elevated by the chugging, deep tones of an upright bass, a simple, easy backbeat and some watery guitar work.

Workingman’s Blues is a lot of things, but at its heart it is and tries to be only one thing: a damn good rock n’ roll record. There are a number of talented musicians out there keeping the rock of yesteryear alive (JD McPherson and Pokey LaFarge among them), but more than trying to be another Little Richard or Crickets, these bands, including The Bellfuries, are just doing what they were born to do: rock. And boy do they.