Hordes of people flocked to Commonwealth Stadium on a very rainy Sunday night to catch the notorious rock ‘n rollers, A.K.A the infamous thunder from down under, AC/DC as they bashed their way into Edmonton, Alberta on the ‘Rock Or Bust’ tour. Despite the foul weather, Edmonton’s die-hard AC/DC fans of all ages were not phased, as thousands of people could be seen bundled up in rain ponchos with umbrellas in hand and smiles on their faces.

Upon entering the arena, the butterflies in my stomach began to go nuts. This was my first time shooting a show of this magnitude, and I felt like I was in some sort of perfect dream. This was a huge deal for me! Not only seeing, but photographing AC/DC has been on my must-see/shoot bucket-list for years, and finally getting to cross them off of the mile-long list feels pretty surreal.

Kicking off their explosive performance with the title track off of their newest album, Rock or Bust, AC/DC electrified Commonwealth Stadium with a hefty 20 song set, packed with tracks spanning across their incredible 42 year career. Fans could be heard singing along to their favorite songs from blocks away, as the fireworks and cannons of the stage show could equally be seen. With every note that would burst from the amps, the audience would respond with a roar, cheering and singing along to their favorite parts of their favorite AC/DC songs. 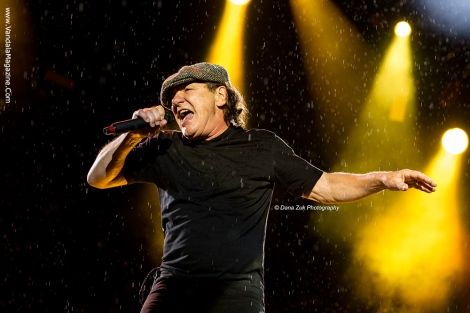 Being surrounded by such an overwhelming abundance of positive energy of this degree was amazing, to say the least. The rain couldn’t dampen the mood in Commonwealth Stadium, even if it was pouring buckets. All the while, seeing rock ‘n roll gods still young at heart; running around and having a total blast on stage, performing to an audience in awe, is truly something magical that’s much to sacred to put into words. So on that note, keep on rockin’ AC/DC, I salute you!