So how have you been?

Zakk: I’m doing good man, I just got back from the South American part of our tour, doing some gigs in Columbia and then Sao Paolo. That was pretty cool.

How are the kids doing?

Zakk: They’re doing pretty good man. Everybody is always asking if the kids come out on the road with us. They’ve got lives of their own man! When they’re little we would take them out, but now they’ve got school and over the summer they’ve got their friends. They get to see us play all the time. They don’t feel like coming to our workplace.

A question I had for you about going on the road, you’re a professed Irish Catholic, how does that face manifest itself on the road?

Zakk: Well I mean with Ozzy first we have all the Satanic rituals and the show and then I would convert back to Catholicism after the show. (Laughter)

There’s also with the Doom Crew throughout all the years, especially during the Animal House years, anytime we saw a church I would go in to say a couple prayers for their blackened souls for whatever boozing and comedy was going on the night before. Just looking after the fella’s! (Laughter)

So all is right with God for you?

Zakk: It’s always been. But the thing is people always ask “Did you quit drinking because you found God?” And I’m like no, I was drinking when I was rolling with God!

Here’s another bit of comedy, people would always be like “Zakk You are a soldier of Christ who you are fighting for him?” and I would say “Muhammad Ali, Smoking Joe, Ernie Shavers, he was pretty tough!” Guys are looking at me all confused? Who am I fighting? 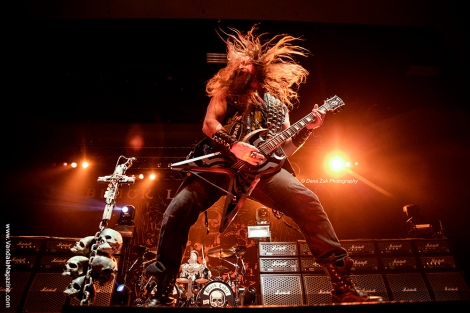 I was going through the BLS discography, you do a lot of acoustic songs, but you’ve never done a happy acoustic song whereas a lot of the people you draw influence from have, why is that?

Zakk: I don’t know. I love Van Morrison too. To me the lyrics that have the most depth and weight to them, whether its The Band or any of the Allman Brother’s acoustic stuff, anything, like Bad Company or whatever. We always just laugh about it. I love Chris Cornell too and when he does sadder acoustic stuff. If you handed him the phone book it would be beyond ridiculous because he’s the man. Same with Jerry Cantrell, with Alice’s acoustic stuff he has amazing lyrics and stuff like that.

The joke we always had was that you could give Chris a super happy song and let him do it acoustic and he would make it sad. His delivery would make it sound like Knockin’ on Heavens Door! I could listen to the lyrics in the 70s whether it’s Foghat and classic rock or KISS, with lyrics like “She’s a dancer, a romancer, I’m a Capricorn and she’s a Cancer, She saw my picture in a music magazine” We were crying laughing. It’s so silly. War Pigs seems to carry a little bit more weight than stuff like that. I think that there’s not a lot of stuff that you can do with it. It’s like with Spinal Tap, Lick My Love Pump is in the saddest of all keys. If I have a good lyric it’s usually the darker stuff. It just seems to work better for me.

What is the saddest of all keys for you?

Zakk: (Laughter) It was D Minor in the movie, but once you start playing anything minor it’s dark. It doesn’t matter.

You were twenty years old when you got recruited into Ozzy’s band, I’m 18 now, and I don’t see any sort of possibility for rock stardom in any form. Is there any hope for people of my generation to become rock stars that way?

Zakk: I think with your generation it’s definitely at a different point. But look at the NFL. You look at all the moves on the field and the presentation between back then and now. The graphics are different, the way the camera angles are, everything is different. But the field is still 100 yards and the rules are still the same, you’ve got 4 downs and you’ve got to go 10 yards. Same with baseball, since Babe Ruth the field has stayed the same.

So it’s like saying with Led Zeppelin that there will never be another Led Zeppelin but then all of the sudden there’s a band like Guns n Roses, and they were awesome. They had the same type of impact. As far as excitement and everything like that at least. To say that will never happen again… Like after Jimi Hendrix people where like “Oh it’s all been done on the guitar” then all of the sudden seven years later you’ve got Eddie Van Halen who comes in with Eruption and he demolished the planet. To say it will never be done again for your generation… probably in regards to having a Black Album type moment with something that sells 20 million copies or whatever, that might not happen.

Obviously people are downloading records now, that’s the way it goes now. When people realize they can get something for free… It’s no big deal. There’s no sense of complaining about it. I’ll buy stuff on iTunes or Amazon. If Van Halen came out today I think it would have the same impact and excitement with David Lee Roth and it doesn’t matter on era. It’s just them. Unless you’re a pop or country artist you can’t do well in regards to that. Now it’s down to touring. It’s harder for your generation because how do you get the money to build a following?

You can promote as much on social media and stuff like that which is cool too. Back in the day you could kiss as much ass as you wanted but if MTV didn’t want to play your video then that’s that. When Alice in Chains went from the best kept secret to people going “Wow that’s amazing” but if we didn’t get on MTV it was like “This sucks, career over” Now you don’t have to kiss their ass, you can put your stuff all over social media and have five million people see it. That’s a plus. I think some friends who start bands and they get a tour bus and they need to get a thousand dollars a day minimum. They see they’ll be getting thirty grand and they think they can build a following. But you can’t! If you’re 18 years old you need your parents to take out a business loan for you! It’s like if you’re starting a pub, you gotta take out a loan and go into business.

It’s like Apollo 13, we’ve got to figure out a solution. If we’ve got to take toilet paper rolls to stick stuff together to make us get back home or whatever, we’ve got to get back home. This forces us to be creative to look at how you can get people to listen to your band so you can do music for a living as opposed to having some crummy crap job that you can’t stand you know what I mean?

What bands, if any do you think will be able to have that kind of impact?

Zakk: Nowadays as far as the younger guys go, you’ve got Avenged Sevenfold. They’re the biggest band right now. For the younger generation thats their Guns n Roses, their Zeppelin their Metallica. Black Veil Brides have a following as well and that’s all guitar driven rock and it’s not like they’re on MTV 24/7, they’re doing it all themselves. It’s not like they have somebody funding them and the whole nine yards. They’re working their balls off. If you really want to do it it’s just bands like that who keep grinding it out. You have too man!

It’s just like me and you sitting around going why work some crummy job you can’t stand? What are you doing, we want to do music! If you want to do music then figure it out I don’t care if you have to get in a van with all the fella’s and grind it out. We may not be at Madison Square Garden yet, but us sitting at some crap job that we can’t stand isn’t exactly helping. Everything we should be doing should be geared towards music.

Now on a different track, for you as a guitarist in the 80s, were you aware of the extreme metal scene coming up?

Zakk: I knew about Metallica and Slayer. 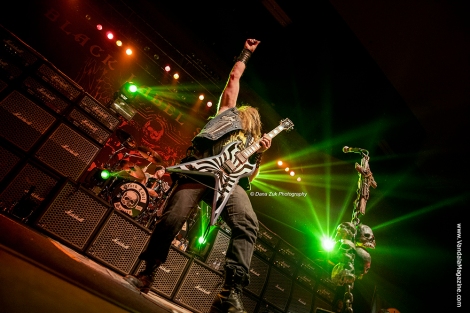 But what about the death metal scene?

Zakk: I had friends that were into that stuff. But for me there wasn’t really anything for me to sink my teeth into. Like the punk rock stuff… I appreciate everything. I had friends who were into death metal, black metal and Led f*cking Zeppelin. I liked everything from Skynyrd to Sabbath, all the classic rock stuff. My other friends were totally into punk and the thrash stuff and everything that was coming up. For me as a guitar player I was into Randy Rhoads, Tony Iommi and Jimmy Page. My guitar teacher turned me on to Al Di Meola and stuff like that. That’s what I could sink my teeth into. They were amazing guitar players. If I’m listening to a band and hear their guitar player given what I’m listening too everything else is kinda silly next to this stuff. I’m not going to eat at some shitty restaurant when I’m already eating at a top notch steakhouse!

If you listen to the Sex Pistols and the Clash compared to some other punk rock, it’s just shit. It doesn’t matter what style or genre of music, like with Miles Davis, there’s good jazz and bad jazz. Especially as a guitar player I take more inspiration from that. If you learn how to play Eruption and Spanish Fly why not play that than learn a song from some third rate punk rock band? I could break my arms and play better than that! That’s what punk was about though, they didn’t give a shit, they didn’t want to play Spanish Fly. Like you said, I was in another place.

Zakk: It’s just kicks ass. A lot of people don’t like coffee, smoking, or whatever, but I don’t know anybody that doesn’t like music. It’s that f*cking easy. In the course of one day you can listen to black metal and then Neil Young. It can put you in so many different moods. It’s really cool. It’s really just that powerful.

Any final words of wisdom?

Zakk: Find what you love and then do that!

You can see live photos of Black Label Society live at The Shaw Conference Centre, in Edmonton, AB on January 2nd, 2015 with photos of The Butcher Babies & Hatebreed. HERE

Be sure to catch Black Label Society live for yourself. If you missed them live not to worry since you can keep up to date with them online.

One response to “COVER INTERVIEW – Comedy, Catholicism and Loud Guitars with Zakk Wylde”