Article by Dustin Griffin and Photos by Vandala Photography

Kelowna’s Keloha Music & Arts Festival has wrapped for another year and for all intents and purposes it was a smashing success.

Two stages were set up on opposite ends of Waterfront Park in downtown Kelowna, with a dozen or so tents selling all kinds of swag peppered in between.

The Okanagan masses came out to enjoy a cross section of independent and mainstream music on the shores of beautiful Okanagan Lake.

With the sun beating down and the city in the grip of a heat wave, this year’s Keloha was probably one of Canada’s hotter festivals to attend with temperatures all weekend floating around the upper 30’s and some accounts over 40C. People know how to make due though. Supersoakers, food trucks and lots of water helped keep the heat in check. While the fact that Keloha’s sand stage was literally right on the water gave people the option to splash around in the lake while a band played just a few feet away.

The festival kicked off Friday night with the band JPNSGRLS, a group made up, ironically, of boys. The Vancouver band play a brand of energetic indie rock/punk that’s fairly popular, or at least easily found, these days on the Pacific coast. Think of a less fuzzy Japandroids, or a more polished B-Lines and you’re on the right track.

Shortly after JPNSGRLS wrapped up, Kelowna’s own The Wild! hit the stage. The Wild! are a hard rock outfit that sound like a cross between early Guns N’ Roses and garage punkers The Hellacopters. And with Andrew W.K. approved song titles like ‘Party Till You’re Dead’, you know these guys exist as The Wild! for no other reason than to rock the house, be it basement show or beach festival.

Keloha isn’t anything close to a punk or metal festival and those looking for a little punk rock grit in their music were to be found in front of the Island stage during The Wild!’s set. Mohawk’d parents with Mohawk’d kids milled around with people decked out in leather and studs (in temperatures pushing 40 degrees Celsius. Apparently heat has no baring on fashion). And the band gave them what they were looking for.

Each member of the band is a show unto themselves. Pistol Pete on rhythm guitar, commanded his slice of the stage by providing enough entertainment on his own to keep on lookers busy, while Dylan Villain, on vocals, impressed with booming, versatile vocal abilities that fit the music perfectly. When the band slowed the pace with a blues number, Villain showed just what it was he could do by adopting a blues inflected croon that showed, whether pure rock or blues, he has the pipes to the fit the bill.

The Wild! may not have been the most recognizable act on the bill that night, but they held their own and proved what a solid stage presence they were.

Most people though, showed up late to Keloha that Friday night to catch headlining act Monster Truck rock the Island stage as the sun dipped down behind the mountains to the west, finally giving festival goers a break from the heat. 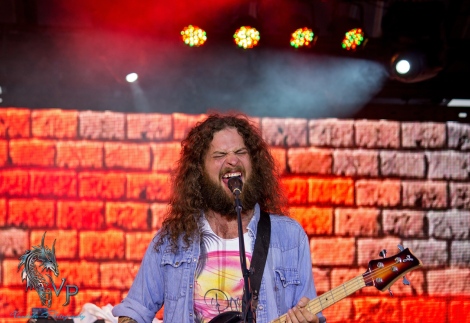 Hailing from Hamilton, Ontario, Monster Truck are a band that are committed to rock n’ roll in its more basic form. Crunchy guitar licks, yowling, gritty vocals and a tight rhythm section. The band sounds like Soundgarden used to and are obviously indebted to bands like CCR. In fact, Monster Truck’s singer Jon Henry, is not only a vocal dead ringer for Chris Cornell, but looks a hell of a lot like him as well.

The band have a great presence on stage and had more than a few eager and appreciative fans in the audience that night. They rocked their way through a set that touched on every album, including a few covers and non album tracks. The band commented a number of times on the beauty of Kelowna and how welcome they felt while here. The band commented on their time here: “Well, I almost feel spoiled after our time at Keloha. We arrived a day early and divided our time on the beach in the sun, boating around on the picturesque water, taking a few laps around on the wakeboard and eventually played a nighttime set under a full moon to a sprawl of new and old fans. A perfect 48 hours!”

By the time Monster Truck wrapped up, Keloha festival goers had experienced their first full day of beachside music, munchies and heat. A decent primer for day two, which was supposed to be even hotter. Music and temperature-wise.

MORE PHOTOS AND FULL SIZED ON OUR PHOTO PAGE HERE

Day two of the festival featured an even more action packed and eclectic mix of musical talent. Bands like the easy folk stylings of Honest Wood and the neo blues of Vancouver’s Rolla Olak helped get the ball rolling earlier in the day over on the sandbar stage. The Toronto area band The Balconies were the first band of the day to bring out the rock, with their potent bend of indie pop and pure rock n’ roll attitude, best exemplified in songs like ‘Kill Count’ and ‘Boys and Girls.’

A little later, again on the sandbar stage, my personal favourite performance of the festival came in the form of The Harpoonist and the Axe Murderer, a very talented duo from the West Coast.
The band play a delicious cocktail of 50’s era blues and rock n’ roll, but with a modern sensibility. Considering there’s only two of them, they make a hell of an impression and their command of the stage is impressive. Steve ‘The Harpoonist’ Hall has an amazing voice, not at all unlike the golden era pipes of the likes of J.D. McPherson. His ability to rock a mic and an electric harmonica simultaneously is an impressive feat. Meanwhile his wingman, Matthew ‘The Axe Muderer’ Rogers is a one man band, covering everything from background vocals, to guitar, drums and more, at the same time. Halfway through the set, the band brought a few extra members on stage and the sound expanded. Songs like ‘Shake It’, ‘Roll With The Punches’ and ‘They Don’t Make ‘Em Like They Used To’ were highlights of the set.

Over on the Island stage, Hey Ocean!, one of the festival’s bigger draws, filled the air with their beach friendly blend of pop and indie rock. Songs that suit the sun and the sand and you imagine is just the kind of music the festival had in mind when it was first imagined. Despite the heat, which, as promised, was even hotter than the day before, the band played a good set, interacted well with the audience and sounded great.

There was plenty to do at Keloha aside from music this year as well. Milkcrate Records, Kelowna’s best and most authentic record shop, had a booth set up selling shirts, records and other assorted goodies. As did West Kelowna’s surf, snow and skate shop Freeride. There was also a good assortment of food to be had, including a Kelly O’Brians truck serving their signature ponchos. There was even a fenced in, admittedly haphazardly constructed smoking section, which is a nice idea for us none smokers.

Later in the evening, Los Angeles indie rockers Local Natives wrapped up the night with a passionate set of easy rocking tunes to a packed audience. They’re a great live band, but again, their set was probably the most popular not only because of the music, but because it was played after the sun had disappeared behind the mountains and the air had finally cooled. 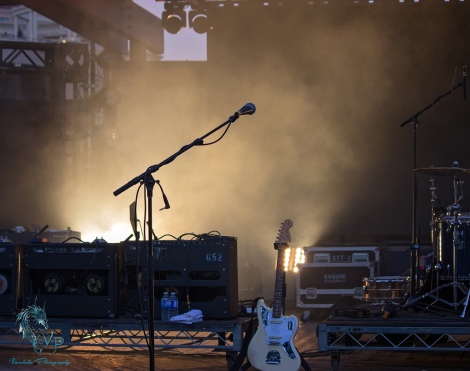 Sunday kicked off in the early afternoon with a handful of BC Showcase artists, courtesy of K96.3.

Bend Sinister hit the sandbar stage around 3:30 and played a cool set of straight ahead rock n’ roll that easily moved from energetic rock to easy going ballads, all of it sounding as good no matter the tempo.

Gay Ninties, ASTR, The Funk Hunters and Blonde Fire rounded out the afternoon and lead into the festival’s main draws The Mowgli’s, St. Lucia and The Naked and Famous.

New Zealand’s The Naked and Famous appropriately wrapped the festival, being that they were the biggest band (most commercially successful). Their indie pop anthem ‘Young Blood’ alone was probably the most well known song of the whole weekend. The band doesn’t move around a whole lot on stage, but play their songs with a lot of energy and passion. Also they sound nearly as good live as they do on record, which is always nice. Vocalist Alisa Xayalith in particular sounds amazing with her impressive voice booming over those oversized speakers.

Keloha 2014 went off without a hitch and it was hot as hell the whole weekend but thankfully Kelowna sits on a big, clean lake which was easily accessible to festival goers.

All in all a nice primer for the city as it prepared for the more party-centric chaos that is Centre of Gravity a few weeks later.