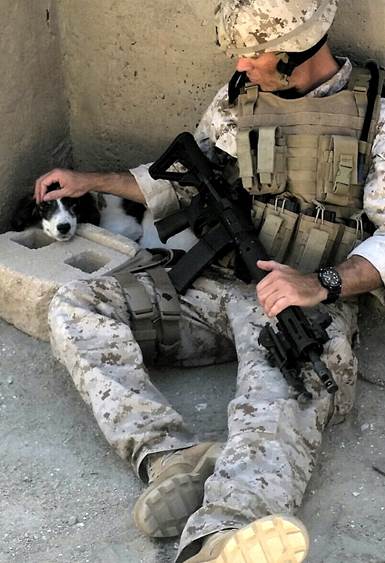 Saiga, a dog rescued by The Puppy Rescue Mission, and her soldier friend

The ROCKSTAR ENERGY DRINK MAYHEM FESTIVAL is deep-seated in U.S. military and veteran communities – avidly promoting programs like Metal of Honor, in conjunction with The Pathway Home (PTSD rehabilitation facility) and Hope For The Warriors (Military family assistance, veteran transition assistance, employment preparedness). In addition to these programs, the festival actively supports another great cause in conjunction with our troops: The Puppy Rescue Mission!

The Puppy Rescue Mission (“TPRM”) is the brainchild of president and founding member Anna Cannan. Anna’s idea for TPRM began when her fiancé, Chris, was deployed to and stationed in Afghanistan. TPRM’s primary mission is to help bring home the companions to our soldiers serving in a war zone. These companions already have homes waiting for them — they just need help getting there. TPRM believes that these beloved companions have at times not only physically saved our soldiers from harm but have also filled an emotional need for a sense of home and normalcy in a hostile and dangerous environment.

Last summer, Rob Zombie donated his incredible truck featured on History’s Counting Cars to TPRM. At the time, Rob Zombie stated, “… soldiers in Afghanistan would find these dogs and bond with them and sneak them on the bases, even though they weren’t supposed to have them. It was probably the only moment of sanity for these guys, when they spent time with them….But they weren’t allowed to take them home, and if they could, it was so expensive. That was a cause I could really understand and get behind.”

Saiga, the dog featured in the PSA, is an actual rescue animal from the Afghanistan war zone adopted by festival producer John Reese and his family through TPRM. As a puppy of a dog befriended by a soldier serving in the Middle East, Saiga was brought to the US from Kabul, Afghanistan at four-and-a-half months old.

ROCKSTAR ENERGY DRINK MAYHEM FESTIVAL producer John Reese states, “The sacrifices made by our men and women serving overseas are numerous. Having to leave a dog behind that one may become attached to is just another sacrifice that most of us aren’t aware of. The work The Puppy Rescue Mission does is so important.”

“A sincere thank you goes out to the ROCKSTAR ENERGY DRINK MAYHEM FESTIVAL for their support and dedication in making these reunions possible,” states The Puppy Rescue Mission Founder and President, Anna Maria Cannan. “The bond between a soldier and his dog is truly unbreakable. Thousands of miles away from home, it is sometimes the one thing in the world that can bring a smile to their face.”

For more information on THE ROCKSTAR ENERGY DRINK MAYHEM FESTIVAL and other programs involved with the festival, visit www.rockstarmayhemfest.com. Make sure to also visit the site for a full listing of this year’s tour dates and line-up information, as well as future announcements regarding the festival.