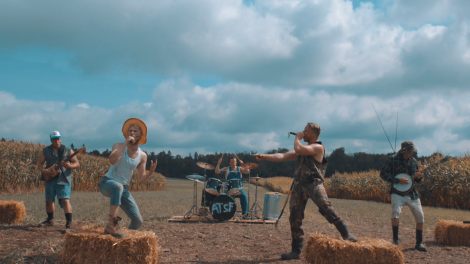 You’ve probably heard of metalcore, but how about Cob-Core? Canadian quintet As The Structure Fails turn the cornfield into a moshpit in their latest music video for their new single “The Surface.” Led by dual vocalists and brothers Kyle and Carter Laird, the technical and melodic track delivers a certain level of chaos to compliment the lightheartedness of the video.

“We decided to take a jump outside the standard heavy music videos we tend to see, to create something outside of the box,” says vocalist Kyle Laird. “We feel like this video truly is one-of-a-kind, reflecting our own lives of living in small towns and working on farms. We hope people see the humour in it.“

In the video, the band can be seen hardcore dancing in the hay, playing some pretty unconventional instruments, and getting squeaky clean in a makeshift tractor tub before they go on to completely dismantle the farm.

As The Structure Fails originally formed in 2009, but it wasn’t until 2015 that the Ontario group solidified their line-up. The band barely got off the ground before drummer Kyle Clarke underwent multiple brain surgeries for a life-threatening diagnosis called Arteriovenous Malformation. Luckily, he made a full recovery and the group released their self-titled full-length in 2018. Topics of the album focus on damaged relationships, addiction, and the immoral habits of our culture. The band brings forward the idea that society, although corrupt, can change. They believe one person or one action everyday has the potential to bring a light into this sometimes dark world.

Listen to the single “The Surface” now on Spotify.