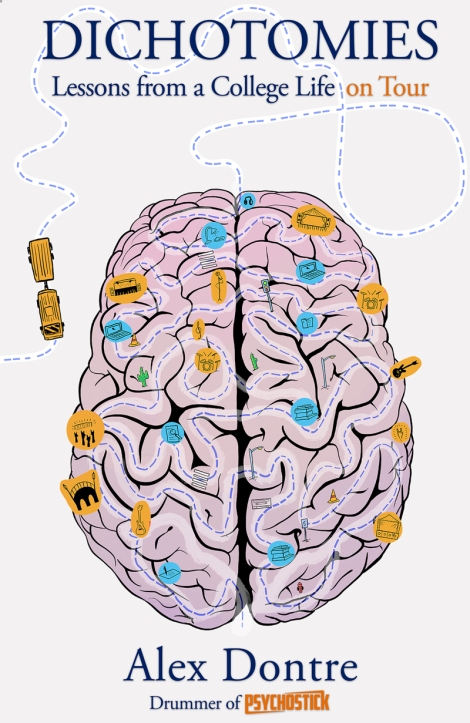 ALEX DONTRE, drummer for acclaimed comedy-metal band PSYCHOSTICK, reveals all in his new autobiography, Dichotomies: Lessons from a College Life on Tour. A must read for any musician and / or college student, Dichotomies tells the unique story of the drummer’s simultaneous musical and academic achievements through the artist’s unique mix of humor and self-perception.

The touring band life of a full-time student is full of dichotomies. From 2011-2017, Alex Dontre performed 505 concerts with his band PSYCHOSTICK while simultaneously pursuing a college education. It culminated with a master’s degree in Business Psychology from Franklin University, at which time he gave the commencement speech at his graduation as valedictorian.

Advance Praise for Dichotomies: Lessons from a College Life on Tour

“I feel stuck between a rock and a hard place and cannot decide if this book is funny or insightful. As inferred from its title, that’s probably because it is both.”
– Mats E. Eriksson, Ph.D., author of Another Primordial Day, Professor of Paleontology, Lund University