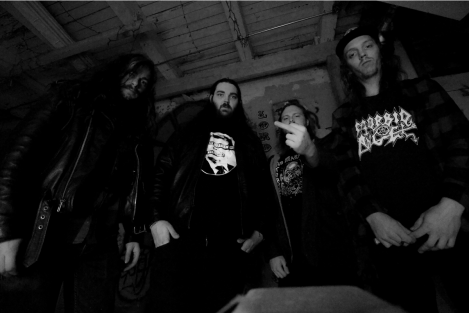 Detroit metal mainstays PLAGUE YEARS have released a brand new video for their single “HELLBORN”. The track comes from their LP titled Unholy Infestation which came out last year.

“This song is about the Hellborn committing genocide on a world that God has abandoned,” says the band. “Hellborn is a breed of people reborn from the dead who are recruited for Hell’s Army. Anyone who follows our band we consider them, Hellborn.”

The band announced their new label home with eOne earlier this year. PLAGUE YEARS will soon enter the studio with Nick Morris at Elaire Studios (The Black Dahlia Murder) to begin work on new material slated for release next year.

PLAGUE YEARS also announced a batch of dates in October with Skeletal Remains and Frozen Soul.

Plague Years call Detroit their home. They are Tim Engelhardt (vocals), Eric Lauder (guitar), Rian Staber (bass), and Mike Jurysta (drums). Unholy Infestation is the band’s second album and is the follow up to their first self-titled album that was released in 2017. Unholy Infestation sees the group refining their attack and taking aim at their contemporaries.
An eerie alien intro crashes into a full frontal assault of crunchy guitars and pounding double bass on the opening track. The pace chugs into low gear with wailing guitars before charging forward with ruthless brutality.
Listeners will find Plague Years reminding them of the punishing music of Obituary, Sepultura, and Destruction. The intent is to lay waste to your senses on every song.
The bludgeoning power of Plague Years stands tall on “Outer Darkness” and “Aeon of the Serpent.” The caustic vocals, crushing guitars, punishing drums, and strong bass come together in a fantastic mix despite this initially being an independent release. Plague Years does a marvelous job of mixing up the pace with fast charging riffs balanced by slower-paced skull smashers. The music dares you not to headbang. There is no point in resisting, just let it fly.
Unholy Infestation incites the need within every metalhead to thrash. This EP conjures up all that you love about fist-clenching thrash metal. Explosive rhythms, caustic vocals, and flesh-searing guitars invigorate the amygdala and elevate the listener into a state of teeth gnashing bliss. Grab some friends, throw them around the room, and let the power swell of Plague Years wash you free of all your rage and pain.
https://www.facebook.com/plagueyearsdet/