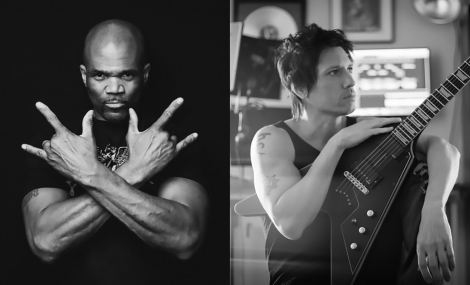 Legendary Hop Hop Pioneer DMC (RUN-D.M.C) has released a teaser for the new song, “The Man.” With instrumentation written and performed by MATT ZANE of SOCIETY 1, “The Man” appears an unlikely collaboration due to Zane not being known publicly for his songwriting or guitar playing but, unknown to most, he is actually a graduate of MIT for guitar. Since then Zane has written and licensed multiple songs for various outlets but took a substantial break the last few years to focus on his directing career. DMC and Zane met when the late Wayne Static introduced them, believing Zane would be a good fit for directing the music video and track “Noise Revolution,” which Wayne sang on. After directing the video, Zane was inspired by the collaboration but was overwhelmed with music video work which forced his musical aspirations to be neglected for years to come. After a conscious shift to re-focus on music Zane’s very first track was written specifically with DMC in mind.

“Collaborating with DMC was an absolute dream come true. Before I knew about The Doors or Jimi Hendrix RUN-DMC were my gods. My very first guitar lesson I showed up with a copy of ‘Raising Hell’ because my teacher asked me to bring in music of my favorite artist…I swear to you I almost cried when I heard his iconic voice over my music and playing for the first time. It was a religious experience. I put it at the same level as when I performed at The Download Festival suspended with my band Society 1 in front of 80,000 people.” – Matt Zane

“Lord Zane creates music that is insane! Powerful, energetic, fun, and captivating. He gave me that HARD hitting riff ROCKING sound that takes the King Of Rock to the next level! The beat and the guitars for the collaboration we did grabbed me in a headlock! The sound, arrangements and vibe is a force to be reckoned with! He has allowed me to continue to live my Rock N Roll dream. He’s “ the man” that’s why I called this song The Man…lol…the music dictated the title and vibe! This track definitely absolutely and completely ROCKS and Rolls!!! So move out the way!” – DMC

Darryl McDaniels or “DMC” as most of the world knows him, first made his start in the music business as one-third of the groundbreaking rap group Run-DMC and quickly became the most popular in terms of fans and influence. He has been in the public eye for the past 20 years, since forming the now legendary, defunct group, RUN-D.M.C with Joseph (Rev. Run) Simmons and the late, great Jason (Jam Master Jay) Mizell. Also one of the founding members of this multi-platinum music group, selling over 30 million singles and albums worldwide, it would be hard to overstate his influence on popular culture. He helped transform Rap and Hip Hop into the most popular music in the world, while building a fan base that rivals the biggest acts in Rock ‘n’ Roll.

DMC has recently added another list of firsts to his life – his first book entitled “King of Rock: Respect, Responsibility and My Life with Run-DMC” (St. Martins). The book, written by DMC with Bruce Haring with the forward by rapper/actor Will Smith, offers a flavored tale of his rise within the music business while stressing the importance of respect and responsibility in today’s society. It has received rave reviews nationwide. Entertainment weekly called it “strangely compelling, bravely honest… plenty of entertaining anecdotes about life back in the day to keep you turning the pages. Like Will Smith, McDaniels is a born charmer.” Publisher’s Weekly says the book is “hard hitting yet sensitive… he (McDaniiels) argues astutely that ‘very few of the rappers will admit they’re creating a fictional character,’ and thereby create problems for themselves.”

In addition to the new book, DMC released his own musical project entitled Checks, Thugs, Rock-N-Roll.