The legendary Roxy theater on Sunset Boulevard in Hollywood has been a showcase venue for some of the biggest names in rock music for over 45 years. The tradition continued on March 12th when 90’s Alt rock powerhouse bands Bush and Live played a secret show sponsored by local radio station KROQ. The theater was packed to the 500 person capacity, but the time the first band took the stage with a crowd made up of radio contest winners, music executives, and friends of the group.

The show was organized to announce the ALT-IMATE Tour. The national tour starts on June 6 and wraps up on September 8th traveling through 33 cities. Both 90’s Alt-rock bands will be commemorating the 25th anniversary of their hit albums, Sixteen Stone and Throwing Copper. The tour also features the Canadian group Our Lady Peace as the opening act. 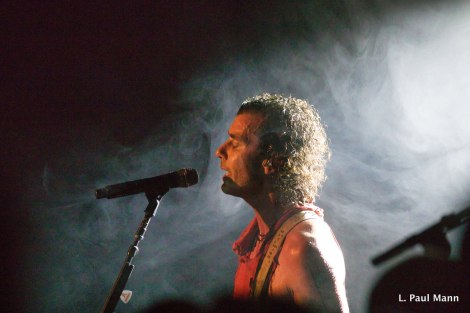 There was great anticipation in the air as the crowd packed tightly about the stage in the Roxy awaiting the show. Elated music fans could be heard exchanging their favorite concert memories of the two beloved bands. Live exploded onstage first amidst an explosion of light and sound. The ear-splitting sound system filled the small club with booming music. Fronted by intense singer Ed Kowalczyk the founding member of Live, the band tore through a 45 minute full of the bands most well-known songs.

The band also features original members Chad Taylor on lead guitar and backing vocals, Patrick Dahlheimer on bass, and Chad Gracey on drums. Rhythm guitarist Zak Loy joins the band on tour as well as additional drummer Robin Diaz. Live’s set included songs from Throwing Copper, Mental Jewelry, Distance To Here and Secret Samadhi. The crowd reacted euphorically even singing the chorus lines of some of the bands most well-known tunes like  “All Over You,” Selling The Drama,” “I Alone,” Lighting Crashes” and “Pain Lies.” As the band played their final tune, Dennis Rodman appeared in the crowd with his trademark cigar and for some inexplicable reason decided to take the stage. He rambled about pointing to the various band members and sang into the mics on occasion. Obviously, a friend of the band he hugged the lead singer tightly at the end of the set. 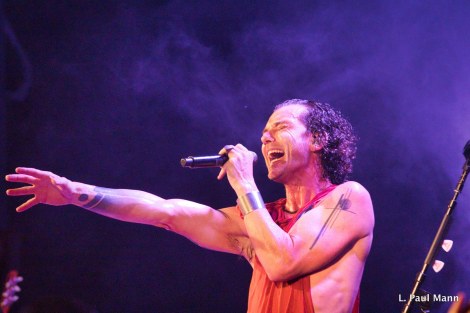 Co-headliners Bush took the stage next led by the charismatic singer-guitarist  Gavin Rossdale and stepped up to the challenge of following the intense performance by Live. Rossdale looked every bit the rock icon wearing a sleeveless shirt revealing a sinewed body that looked more like an animated superhero than a real human. The English rockers blasted through an hour-long supercharged set filled mostly with the bands biggest hits like “Machinehead, “Everything Zen,” “This Is War,” and “Testosterone.” The current group features Rossdale on passionate growling vocals and wailing guitar, Chris Traynor on intense lead guitar, Corey Britz on bass and backing vocals and Robin Goodridge on thundering drums. The veteran band is one of the most intense live bands keeping the Grunge sound fresh and viable. It was another special night in a long history of unique rock moments at the Roxy theater for a lucky few rock fans. 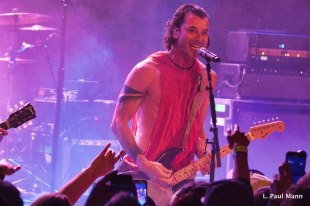 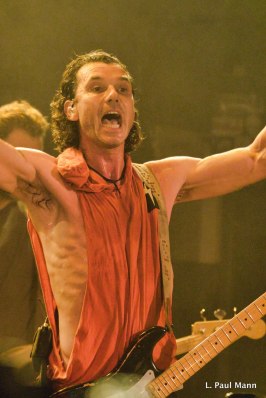