An appreciative audience packed the tiny Ojai Underground Exchange for an extraordinary concert Sunday, March 3rd. The small venue is a combination dance studio and performance hall that holds less than 100 people, and lies tucked away just off the main highway 150 that passes through the beautiful mountain enclave of Ojai, California. The show was another feather in the cap for local concert promoters Steve and Polly Hoganson from Ones To Watch Productions. The couple has been bringing great Americana music to local venues for years. The new performance hall is the brainchild of  Bernie Larsen and Cassidy Linder. Larsen is a veteran musician and producer, who has worked with many well-known artists, including Melissa Etheridge, Jackson Browne, and Rickie Lee Jones. Linder comes from a professional dance background and also runs the dance studio.

The intimate little venue was the perfect backdrop for Reverend Tall Tree’s Blues Opera. The show unfolded just as the title describes as a two-part musical opera drenched in authentic American Blues music. The show is the creation of veteran singer and multi-instrumentalist Chris Pierce. The talented California songwriter has released 9 albums since he first began recording in 2002. In 2017 Pierce co/wrote the hit song “We Can Always Come Back To This” which was featured on the hit NBC television show “This Is Us.” His music has also been featured on TV shows like Brothers & Sisters, What About Brian, “Dawson’s Creek,” “Eli Stone,” “Half and Half” and “The Long Shots” featuring Ice Cube, as well as many more. Pierce, on top of many other musical endeavors too numerous to mention, he is also co-owner of a wine label called Ledbetter Syrah.

Pierce exhibited his multiple musical talents at the Ojai show, singing, dancing, and storytelling while playing spirited guitar and harmonica licks. He was backed by a trio of talented Blues rockers that kept pace with the mercurial Pierce like a well-oiled machine. The performance was a bit like Garrison Keillor meets an old fashioned tent revival. “Reverend Tall Tree’s Blues Opera” was written by Pierce & Mark Malone and according to them, “is a tale told in twenty-one songs, following the journey of a fictional street preacher, many years ago in the American Deep South. A story of love, sorrow, earthy humor, and finally, redemption, following ac Reverend Tall Tree as he plies his trade (leading street revival meetings) in the dusty small towns of the lower Mississippi valley.” The two-part odyssey follows the life of the fictional reverend including a classic bet with the devil resulting in a crowd stomping finale.

You can check the Chris Pierce website for more information on his recordings and upcoming concerts:  http://www.chrispierce.com/. 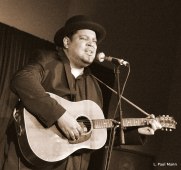