Stone Temple Pilots along with Seether and Default kicked off their tour this week in Penticton BC. Where all the bands gave it their all and performed with a lineup that was memorable.

South Okanagan Events Center once again brought an amazing line up of bands to the valley. I came for all three bands Default, music as the bands were part of my life in my teens and 20’s and onward such as Seether.

Canadian rockers Age of Days kicked off the show setting up the crowd for Canadian (Vancouver!) rock band Default with a list of awards and number ones. As many know lead singer Dallas Smith now has a solo career singing country and I myself seen him live on his solo tour. On that tour I have to say he was one of the nicest guys to the fans. Though before I even came I was concerned “Default” would not be “Default” anymore; boy was I wrong. Dallas came with his power rock voice setting aside his country sound ( I might add a very talented one) while Jeremy Hora (lead guitar) and Dave Benedict (bass) took over the stage.

The crowd sang along to hits like Wasted My Time and Deny songs that made the bands career. The album “The Fallout” was a poster album for break ups in my life like so many others back then. Default did a great mix up of songs that any fan would of left feeling satisfied getting their fill of Defaults library of music. Overall Default has not aged and played as if they were never apart.

Seether a band that I love not only for their songs but for their attitude. They have an arsenal of passionate songs along with in your face songs which creates a band that is so diverse. I was very curious on how much older songs would be played as the band released “Poison The Parish,” last year which debuted at #1 on Billboard’s Hard Rock Albums chart. An excellent album though when bands come to Canada fans want to hear it all! I myself being one of them.

The four songs I came for where Fine Again, Fake It, Betray And Degrade and Broken were played and I was beyond over the moon to hear all of them along with more hits from the new album. I was very shocked to hear “Broken” live as most know it as a duet. I have heard both with and without Amy Lee as each version tends to have its own emotion. Live this version gave shine to Shaun Morgan vocals which brought the power of the lyrics of “Broken”.

One thing I noticed was lead singer Shaun Morgan was off to the side of the stage which usually lead singers are in the center though worked for the Seether. While in the photo pit with Shaun Morgan to the side I got distracted by drummer John Humphrey so many times. Normally I hardly notice the drummer while in the pit as they are usually far back though this one mesmerized me here and there as he was in his own world. Later on, I saw why the lead singer was to the side because he went into the crowd and played his guitar while the fans bounced around him. Even more surprising he threw his guitar back on to the stage while his bandmate caught it.

With songs like Betray And Degrade (new) and Remedy (Old) the band put on a performance that Seether fans came for. Many fans in the front were also lucky enough to get one of the many picks that were being thrown by band members. Drummer John Humphrey at the end even came off to give his sticks away.

By this time the only disappointment of the night was the sound quality. Veteran bands like this line up can handle it though it was noticeable enough to be a thorn. Being a 90’s fan it wasn’t a bother as it would be to some of the other fans which a few made comments about.

To round up a night of memories of a spectacular line-up was STP. They came out and they came to play. The line was founding members Dean DeLeo, Robert DeLeo, Eric Kretz adding in Jeff Gutt on Vocals. Like the other bands, they played a mixture of recent songs from the Self Titled album (2018) released this year. Plus the band, of course, had to play the classics as STP was one of the ages that made the 90’s.

Before I get into the show I struggled with this review some and posting later than usual. Why? I read articles before and after the concert on Stone Temple Pilots and what I call the “critics” and many were so brutal on the band. After seeing them live I am confused about why those critics are so hard on the band; a millions views for the single “Meadow“.

The band for myself was a vital part of my teens and 20’s as their songs are what I call the classics and staples of the time period. A time where getting top of the charts was difficult as it was full of talented bands. I find myself maybe going against the grain of opinion though as I age I tend not to care as much. Which reminds me of the time the time period where Stone Temple Pilots topped the charts, a time we were nicer on musicians; maybe it’s because everyone can write a review and post it unlike back in the 90’s who knows.

The main thing STP critics have slammed the band for using different singers and the band “sound has changed” but in my opinion have been brutal on these guys. Scott Weiland was a man who was very unique and had an aura about him on stage. Something that I always will remember watching is the rock star on stage as he was one. The band had its struggles and eventually had to deal with the death of Scott Weiland. STP had many different singers over the years and everyone had an opinion even myself as they were not quite right. I have seen the band when they started, even when they had Chester Bennington (RIP) fill in for a while and now in Penticton where they kicked off the tour with Jeff Gutt. Stone Temple Pilots recruited Jeff Gutt who is best known for finishing second on season three of The X Factor USA. Gutt, it turns out, is a solid replacement for Weiland. Some would call him a sound alike though I did not hear it. Yes, he is very similar but he has his own voice and sound. Personally, I find the word “sound-alike” offensive. Scott passed on and he had his legacy and Jeff Gutt is creating his own legacy as an individual. With the new album it is different because the band has progressed and grew like all bands do. Though Jeff’s voice brought back Stone Temple Pilots with a touch of “Gutt” and he is the right fit for STP. For myself, the songs have always been the main part of being a fan and for the band to find someone who could sing those songs was not an easy task and I believe they got the right man for the job – maybe those harsh critics might be silenced and just enjoy the music. 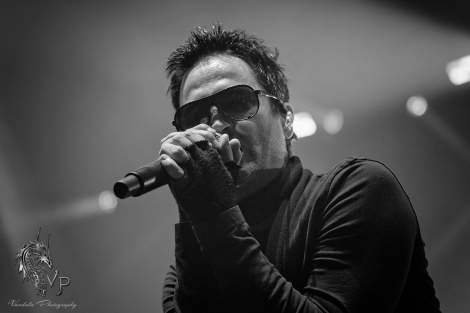 Live this band is back and in full force with Jeff Gutt at front and center along with bandmates with their own style and movements. Robert DeLeo played the bass with his signature style of movements of foot and finger work. Dean DeLeo, Robert, and Eric Kretz are playing more powerful than ever just as I remember. Jeff Gutt took control on stage and the music. His movements on stage and vocals had the essence of Stone Temple Pilots and made the songs breath again live once more. The fans went crazy over classics like Interstate Love Song, Big Bang and many more. 26 years later the band is strong as ever with new music and will continue to go strong in the new stage of their music. You can catch the band live along with Seether and Default across Canada now. Full Tour Dates below.

*without Age of Days

One response to “Blast From the Past and a Surge Of the Present – STP, Seether and Default Live!”