You’ve been creating masterpieces within the music world for nearly thirty years. What keeps your creative flow thriving after all this time?

Ryan Shuck: F*ck am I THAT old?? (yes I am). Maybe not THIRTY YEARS? *Laughs* I’ll tell what keeps my flow going; I want to be HEARD. I demand it. I want to deal with my tragedies. I want to disrupt. I want to communicate – and not always in a conversation. At a deeper level. With my music. With my lyrics. I want to be taken “seriously”, but without being a pretentious asshole. I care. A lot.

I want to let our fans know I care. I want to connect with them. I want to please us BOTH. I use music to deal with the issues that would otherwise destroy me.

If you had to choose a specific food dish to describe your clean vocals what would it be and why?

Ryan Shuck: I suppose a delicious Argentinian Malbec? I think I have a deep and somewhat sensual voice, and I want to make your mouth water. Not really a “food dish” but it is a consumable! When you drink red wine, it kind of opens up your throat with its warmth and makes your mouth water a bit.. Maybe that’s how I picture the perfect vocal environment.

By the way, I have not had a drink of red wine in years! *Laughs* But I remember!!

Ryan Shuck at the Gypsy Den to have breakfast with Linkin Park ambassadors from all over the world.

Let’s take a time capsule back to your early teenage years and first discovering music. Are you able to describe the feelings that poured out when you first picked up an instrument and knew music was your true calling?

Ryan Shuck: Yes, easily. In my small town of Taft, CA, there were virtually ZERO examples of ANYONE that could play music. At all. I loved music, but it was a ”listen only” type of relationship. I then met a friend in high school that accidentally showed me that you COULD make the sounds that Metallica was making – you COULD play guitar like Slayer! His name was Dennis Shinn. Dennis hates me now for a variety of reasons, but one day in high school, when we were fast friends, we were locked out of the gym during P.E. class. Dennis, a metal drummer, did a brutal metal beat on the gym doors to let the people inside know to open the door. Well. I thought that was pretty much an eye-opening experience! He could just “make that beat happen”. Himself. With his own hands!!! I was BLOWN AWAY.

Can you remember the first poem you wrote?

Ryan Shuck: I don’t think I have ever written a poem. *Frowns* I guess all my songs qualify? *Laughs*

For the fans. In the early 1990’s You were part of Sexart with Jonathan Davis of Korn. Are you able to accurately break down the events that occurred during your first live show with the band?

Ryan Shuck: I can …NOT. I really don’t remember. I remember a collage of memories. I remember that Jonathan actually sounded like the “real thing”. I remember that I felt like I had to “work hard, and perform hard” but I don’t think I knew what I was doing yet. I remember how amateur the whole operation was compared to anything I am doing now. How good Jon is now. How pro Amir and I are walking into a raw and new situation like LP & friends honoring Chester.

I can only think that I’m proud to be at a point where I’m capable of walking into a room with Linkin Park and Jonathan Davis, NOW. 2018. And I can be on their level skill-wise, and laugh and have fun while we are working on the actual hard stuff. No one “chokes”. We f*cking get it done. I’m hounered and proud of that. I can only remember where I came from. And where we started in Bakersfield together. Me, Jon, David Deroo, Dennis Shinn, and Ray Solis. I am grateful for the skill-set and mental ability I now possess.

When Dead by Sunrise first went on tour, which DBS track did you look forward performing live every night and why?

Ryan Shuck: “Inside Of Me”. It was raw emotional power. I felt like when the song began I wasn’t playing – I was holding on for dear life and Chester was taking the wheel. We were off and I couldn’t stop us, and I could barely hold on. It was like running as fast as you can to catch a car driving away with all of your emotions, but knowing that your best friends were running with you. It was insane. And in my opinion should have been the first single off the album.

It’s incredible that your band Julien-K will be releasing the sixty track album “Time Capsule” brimming with unreleased material recorded over the last decade! What would you say has become the most difficult challenge your currently face while preparing to finally release “Time Capsule” and how you plan on overcoming this challenge of this release?

Holy Shit! SO much can go wrong. The printer being purchased by another company and the new company throwing our project out the window for one! That is HUGE. We are a small, indie band. We have no one to help us figure this kind of thing out. No record label. No product manager. Its all us, and we look like assholes if we don’t get that shit out on time, and were behind now. Big time. But: if you are indie and you do ANYTHING that is out of the “norm”, I have learned that you will encounter some serious technical and production issues. It just is what it is. I’m glad we proved ourselves to our fans with our first 3 campaigns. I think it buys us a little leeway when trying to create something REALLY special that no indie artist on earth would even attempt.

During an online Q&A Julien-K revealed that there will be a guest appearance from Chester Bennington within Time Capsule. Can you shed some light behind the tracks subject matter and what occurred during the tracks studio session?

Ryan Shuck: Yes I can. We very simply have the BEST live vocal performance Chester and I have ever recorded together – EVER, on Time Capsule. We were SO IN TUNE with one another at that point in our lives. We sang with almost no rehearsal, totally in key and in sync, improvising on the spot, completely NAILING it. From a relationship and musical standpoint: It was a “pinnacle moment”. I am so happy that he approved us to use this performance – it was for a charity that Talinda and Chester were supporting in Arizona. We were proud to be asked to play and support, and so happy that it turned out to such a great and RAW performance. 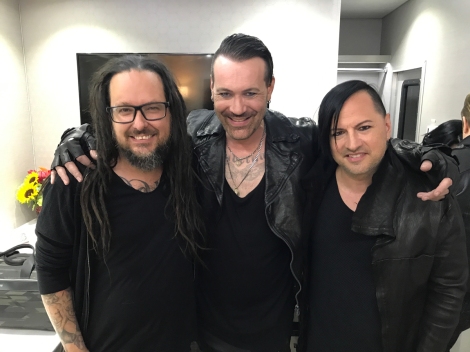 At the Hollywood Bowl seconds before you stepped out on stage with Linkin Park and Jonathan Davis to perform “One Step Closer” during their tribute to Chester Bennington; are you able to go into detail behind the emotions that were rushing throughout your mind and body?

I couldn’t have done it without being absolutely grateful (and by having Phoenix of Linkin Park making fun of me and with me through the entire rehearsals. *Laughs*).

Name a song from any band that always make you cry (no matter what) whenever/wherever you listen to it and why it’s important to you?

Ryan Shuck: At the moment the only appropriate and immediate answer is “Post Traumatic” by Mike Shinoda. This EP moved me beyond words. I absolutely cannot listen to it without completely losing it. I am actually currently thinking to myself “How the F*CK did he do this??” “How did he express himself so intensely and so urgently!?” “HOW!!??” Oh, and it’s also f*cking really good music. So there’s that too. I may actually call him and talk to him about it. I actually need some help and advice. I am beginning the recording process for Harmonic Disruptor with Julien-K, and one of the most “disruptive” issues in our lives is obviously the loss of our best friend. Without Chester contributing to our band and music.. what is there? Moving forward.. without my friend. My brother. What is there? This is where I can actually be honest and let my emotions show. I can be raw. And it’s terrifying. I have tried to remain so positive through this entire tragedy for all of the people out there that love Chester and deserve MORE. They deserve to see us strive to “make it through”. And Mike Shinoda was really personifying that. He was a f*cking machine through this. Through the Hollywood Bowl event. WOW. And to hear his pain so raw? THAT hit me so hard. And I have to deal with this as well, with my music, and I just don’t know if I can do what Mike did. I hope I can hold a candle to how he expressed himself. I need to. For Chester. I need to. He deserves to be the subject of Harmonic Disruptor in a deep way. He deserves so much more. I hope I can make them both proud.