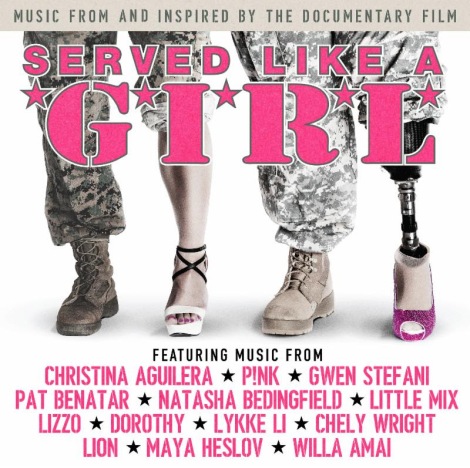 On the surface, this is a star-studded soundtrack to a documentary that sheds light on the resilience of female veterans who have been wounded in the line of duty. On another level, it’s a megaphone for the voices of the women in the film, allowing them to reach an audience that might otherwise not hear them.

The opening track by Natasha Bedingfield is a fun, funky, paradoxical tune that manages to highlight a few hot-button topics regarding gender equality in a playful way that is likely to have you reaching for your air microphone and prancing around your living room. For those who don’t know, prancing is like dancing where you have an audience that is either a pet or imaginary. Grownups do it too. Promise.

Soul and hip-hop diva Liza’s contribution Good as Hell is a divine tune about friendship and how empowering it is to remind yourself how freaking awesome you are, while Maya Heslov’s song Fighter takes the album deeper with an intimate exploration into finding inner strength in the face of loneliness, depression, and self-doubt. This theme is revisited later by the rich, languid tones of Willa Amai on her contribution Scars. Heslov pushes open the door and Amai sets up a living space in the room revealed.

If there is one song that sums up the album, it might be Dancing Through the Wreckage, a classic rock anthem from legendary Pat Benatar. It’s the one song that seems to speak specifically to veterans. While the rest of the album creates connections between women, this song addresses themes that might connect those who have or are serving in the military.

America is a heartfelt love song belted out by superstar and vocal powerhouse Christina Aguilera. Metaphorically, it’s about everlasting love and working through the difficult parts of a relationship. With minimal musical accompaniment, Aguilera’s powerful vocals convey the emotional struggle of believing in something when it looks like it’s starting to fall apart.

Bad-assery rides in under a smooth veil of confidence in the bluesy, psychedelic cowgirl song Naked Eye from up and coming artist Dorothy.

Gwen Stefani lends her talents to the mix with an acoustic ditty called Medicine Man. It’s an unused cut from her album This is What the Truth Feels Like, so it’s fair to assume she’s referring to a certain English musician. It’s just that at times it sounds so much like she’s taking aim at a certain American politician. The song made me focus on how much language plays a role in shaping the way we think.

Pink. When I was young and stupid and refusing to like pop music out of principle, Pink was my guilty pleasure. Her power ballad Halfway Gone was a reminder of why she has always been impossible to resist while the lyrics, apparently penned by producer Linda Perry simultaneously reminded me of how much it sucked loving someone with an addiction.

Looking for redemption? Shine a Light might just be the song for you. The contemporary country sound of Cheryl Wright complete with the background wail of a steel guitar reminds us that forgiveness is indeed a necessary part of the healing process.

An artist by the name of Lion has a lusciously tortured voice and her song Joyride is one of the most intriguing of the album. Easily a memorable tune on any record, it conveys the agony of recognizing a toxic, love triangle and being in love with someone who can’t love you back. I wonder if anyone else will draw real-world parallels when Lion hoarsely whispers we love a bad, bad man.

I found it interesting at first that an album that began with so much energy ended with a song that seemed so wrought with hopelessness. But after listening again and again, I’m not sure that describing Lykke Li’s moving and vulnerable offering End of the Night as hopeless is accurate. The song is just honest, which is what pulled me into the record in the first place. I’m sure I’m not the only one who can identify with feeling lost and alone at least once in their life.

The album is full of songs that can be seen from a personal light, but that also speak metaphorically to the times at hand. For me, it was impossible to listen to it and not recognize that even the mightiest of heroes can feel lost and alone sometimes, just the same as you and me. Maybe watching a hero overcome adversity will help us find strength in ourselves and hopefully it will inspire us to help alleviate some of the adversities they face. As cheesy and contrived as these things sound, I think it’s also kind of the point.

Bonus: 100% of the proceeds from the album will go to the charity Final Salute, whose mission is to provide homeless women veterans with safe and suitable housing.

Listen and get the Album HERE   For more information on Served Like A Girl, visit servedlikeagirl.com. (Youtube Link HERE)