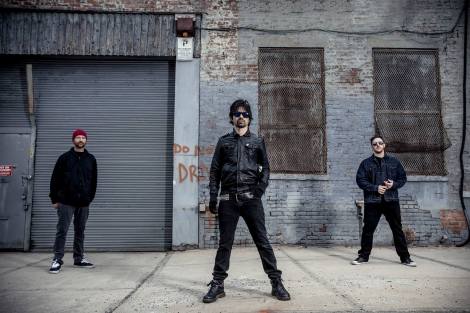 CKY (Chad I Ginsburg, Jess Margera and Matt Deis) have debuted a third new single titled Head For A Breakdown. This is the final song we’ll hear from the band before the release of their new LP this Friday. The band released Replaceable a few weeks ago exclusively via SIRIUSXM’s OCTANE channel, and Days Of Self Destruction (Feat. Brent Hinds) before that.

“Head for a Breakdown seemed to write itself,” says vocalist, Chad I Ginsburg. “In a sense, it’s a song about taking things too far when you darn right know it won’t end well but you do it anyway. Go figure. The mid solo section is an epic break unlike any we have done in the past. Very proud of this song.”

In addition to all pre-orders now being live, all three tracks are also available as instant gratification tracks on  iTunes, meaning fans who pre-order the album on iTunes will receive Replaceable and Days Of Self Destruction as an instant download.

CKY will release The Phoenix on June 16, 2017 via eOne Music. The all new LP will be the first release since the band put out Carver City in 2009. The album was engineered and mixed at Rancho De La Luna, the highly regarded recording studio in Joshua Tree, CA.

The cover art for The Phoenix was completed by chandelier maker and artist, Adam Wallacavage. The band commissioned Wallacavage to create a one of a kind piece for the cover.

CKY just finished a highly successful 13-show run of the UK, most of which were sold out. They are currently on a headline tour in Canada, and have tour dates booked all summer, highlighted by a return to the 2017 Vans Warped Tour, which will be the band’s first time back on the tour since 2000. See a complete list of tour dates here.

Chad I Ginsburg, the band’s guitarist and singer, steps into the frontman role with charisma, charm, and bravado, confidently delivering a diverse performance as he claims a position that was clearly rightfully his to own.

He’s joined in enduring partnership, and musical and personal chemistry, by fellow CKY cofounder, Jess Margera, the drummer whose extracurricular work in projects like The Company Band (with guys from Clutch and Fireball Ministry) expanded CKY’s horizons as much as Ginsburg’s solo work has as well. The duo returned to their primary project refreshed and reenergized, with bassist Matt Deis (ex-All That Remains), who first joined CKY in 2005.

Guns N’ Roses, Metallica, and Deftones have all personally invited CKY on tour, cementing a legacy as a hard-charging live act. CKY built a worldwide fanbase of dedicated acolytes, friends, and supporters, lovingly dubbed the CKY Alliance, with a broader group of musicians, athletes, and other creative types in the CKY family, both literally and figuratively.

“We’re grown adults now with an eagle-eye perspective on who we are, what we do, and how to do it right,” Ginsburg declares, with matter-of-fact certainty. “None of us are out there in the clouds. We’re pretty well-grounded people that have an honest perspective on where we’re at.”