Article and Photos by L. Paul Mann (Photo Gallery at the Bottom)

The Brooklyn-based band Moon Hooch brought their infectious dance trance concert to the Velvet Jones nightclub on a sleepy Wednesday night in downtown Santa Barbara. The trio first got together in 2010, at The New School for Jazz and Contemporary Music, in New York and may be one of the best contemporary Jazz bands in America today. The band themselves, however, may not even consider themselves as part of the Jazz genre and, and most of their fans would identify more with EDM music. But, when the band performs a live show, like their appearance at this year’s spectacular Okeechobee music festival in Florida, in front of 10,000 squirming fans, the trio inspires an uncontrollable urge to dance that crosses most any musical genre.

The crowd at Velvet Jones stood politely through two opening sets before Moon Hooch took the stage just after 10.30 in the evening. The trio includes extraordinary drummer James Muschler the mercurial Mike Wilbur on an astounding array of wind instruments including tenor saxophone, vocals, clarinet, flute, some strange huge horn and Wenzl McGowen on vocals, tenor saxophone, baritone saxophone, contrabass clarinet, and electronic synthesizer. As the band slowly built an engaging introduction to their opening song, the crowd moved from the bar to the front of their stage as if they were in some musically induced trance. By the time the group reached the crescendo of the first song and broke into a cacophony of sound, the crowd sprang into a dance frenzy that lasted through the band’s 100-minute set. The trio offered up an intricately woven set of live music that virtually became one piece of music, with each song fading into the next. The result was a surreal musical experience, painting a mosaic mural of dance-inducing music, that sounded more like that of a veteran jazz band from New Orleans, than the original sound of former music students from New York. The fans of Moon Hooch at Velvet Jones on this night savored every minute of the intimate performance.

It may be worth mentioning for those unfamiliar with the band that Moon Hooch has one of the most entertaining new music videos on YouTube. The first video from Moon Hooch’s latest album This Is Cave Music is an excellent introduction to the band’s infectious sound. 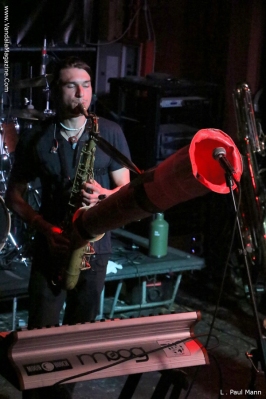