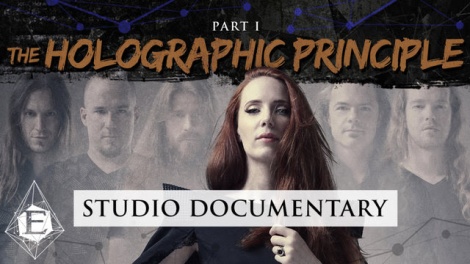 Dutch symphonic metal stars EPICA grant a little insight into the making of their massive new longplayer The Holographic Principle and release a first trailer form the studio. In this brand new clip, the band explains their songwriting process and even comes up with some musical surprises.

“Halfway through 2015, EPICA started a new journey: writing and recording the 7th studio album, The Holographic Principle”, explains guitarist Isaac Delahaye. “In between touring we spent our time in the Sandlane Recording Facilities with producer Joost van den Broek and here’s the first part of our studio documentary! It gives you a little insight into the creation of what we see as our most complete album ever. You’ll hear rough snippets of new music, and you’ll see how we built things up. Enjoy!”

EPICA are set to release their newest masterpiece The Holographic Principle via Nuclear Blast on September 30th but you can already take a peek at the tracklist here:

01. Eidola
02. Edge Of The Blade
03. A Phantasmic Parade
04. Universal Death Squad
05. Divide And Conquer
06. Beyond The Matrix
07. Once Upon A Nightmare
08. The Cosmic Algorithm
09. Ascension – Dream State Armageddon
10. Dancing In A Hurricane
11. Tear Down Your Walls
12. The Holographic Principle – A Profound Understanding Of Reality

The album was produced with Joost van der Broek at Sandlane Recording Facilities. Mixing was handled by Jacob Hansen (VOLBEAT, DESTRUCTION). The cover artwork was created by Stefan Heilemann (www.heilemania.de).

The band commented: “Our highly anticipated seventh studio album is a fact. The Holographic Principle feels to us like a true treasure, created by us all with blood, sweat and tears of joy. In the past year we have worked very hard to write and record this special album. We are all very eager to share it with you! Join us on our new musical journey.”

To celebrate the release of EPICA‘s brand-new record fittingly, the band will be playing on their own Epic Metal Fest at the 013 in Tilburg, NL on Saturday, October 1st. They invited KATATONIA, their label mates FLESHGOD APOCALYPSE and (also landsmen) TEXTURES to take part in this special event. Additionally, STREAM OF PASSION, THE AGONIST, MAYAN, MYRATH, EVIL INVADERS and last but not least OFF THE CROSS will be attending EPICA‘s release show. On Saturday 15th Octoberthe Brazilian edition of Epic Metal Fest will take place in Sao Paulo. PARADISE LOST, FINNTROLL, XANDRIA and THE OCEAN will join EPICA for this first edition.

VIP/Meet and Greet Bundles and upgrades are now on sale via SOUNDRINK. They will include the follow: