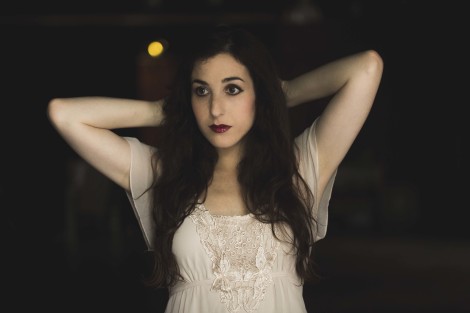 Marissa Nadler is a triumphant musician – her unique brand of dark acoustic music reminds us of Townes Van Zandt and Jeff Buckley. Her new album Strangers is an ethereal walk through paradise.

So how are you?
Marissa: I’m running around like crazy right now! I’m good. I’m in the middle of a pretty intense tour all around the United States. There has not been a lot of down time but I’m good. That’s a good problem to have. I’m really enjoying touring right now with the band. It’s kind of fun actually!

You’ve had a lot of trouble with touring in the past right?
Marissa: Yes. It’s the combination of stage fright, insecurity and inferiority complexes and a fear of failure in front of a large group of people but now I’m more seasoned and professional. I’m realizing ways to make it easier for myself and that includes not touring by myself because that was I think the biggest issue, how lonely it was and how hard it is to fill a set with just one person and the amount of pressure that can create.

So to clarify, Wrekmeister Harmonies is your backing band right?
Marissa: They were planning to be and we tried it out in Europe but it didn’t totally work out. I’ve actually hired the bassist from the band Earth and I have Milky Burgess playing electric guitars and doing harmonies and he actually plays on the new record. Some of those songs are pretty complicated and I was looking for something specific. Members of Muscle & Marrow are filling out the live band and I love that band so much.

One of the things that really struck me as I was digging through the articles on you is that you seem to be really happy right now…
Marissa: (Nervous laughter) I think I do a good job of it. I’m okay. That’s a tricky word. Who is ever really happy? I’m alright. I’m better than I have been. I have some major ups and downs like everyone else. I think I am doing okay because I am trying to live life day by day as opposed to thinking about the future. I think that living in the moment has helped my psychological issues. I’m a real worrywart and the more I can stop my brain from freaking out the better.

I totally sympathize; I’ve had to come to a similar realization in recent months…
Marissa: I’m never going to be like Pharrell Williams!

To circle back… you said ‘Is anyone truly happy?’ and that was just too real for me… Do you think that being sad is an inherent part of the human experience?
Marissa: Yes I do. Even when you watch babies learning how to emote it’s pretty fascinating. Humans are born with complexity. Animals also! There is so much middle ground in between happy and sad, though I would never go so far as to simplify those emotions…

Are you a nihilist?
Marissa: Let me think about that one! I don’t know. I think I’m more of a realist, which is weird for someone who writes such mystical songs. I’m a little bit of a nihilist I think, but I’m not totally negative all the time.

There’s a very human sadness to your music that draws a lot of people to it…
Marissa: I think that’s because I try to be as unpretentious as possible. I believe that one of the greatest unifiers of humanity is music. I don’t want to play music that is pretentious that no one can relate to. I want to be sincere. I can’t stand heavily ironic music that talks down to audiences. I’ve had a lot of people tell me that my music helped them through a hard time and that’s enough for me.

That must be really empowering…
Marissa: Sometimes it makes me feel better, especially if I’m playing a smaller show. If someone says something like that it’s like “Okay, there is some meaning to my life I suppose!”

Do you have difficulty finding meaning outside of music?
Marissa: A lot of people have day jobs that don’t let you think about everything because you are so fucking tired. Because I go on these tours and then go home and there’s nothing I have a lot of time, too much time even to think about why I’m here. That’s why I picked up stop motion animation!

How is that going?
Marissa: My last two music videos I did myself with stop and slide motion animation. I have a fine art background so it’s kind of a natural thing to do, but man is it fun. I’ve been having a whole creative breakthrough.

I know that you had a hard time with fine art for a while because you were being graded on it…
Marissa: It took some of the joy out of it when everything you do is critiqued.

Don’t you run into the same problem being a professional musician?
Marissa: Sometimes! I guess I’ve reached a point where I stopped taking record reviews to heart. I’m doing it for so many different reasons other than to get a good grade or be famous. Those are the least of those goals. I never thought I would be a pop star. The fact that I’m successful is just a cool plus. I don’t know what I would do with my life if I wasn’t making music or art. I do both and it’s a big part of my life and without it I don’t think I would have much identity…

So I saw a quote from you saying that your art is best when you are at your most manic. Do you think that now that you are less manic your art will fundamentally shift?
Marissa: I think that I may have said that a longtime ago. I really don’t believe that anymore. I wrote Strangers in a fine mindset and July as well and I think they are my two best records. That quote is from an older version of myself. I don’t believe that you have to be self destructive to make good art. I use to believe that firmly and I feel like my life used to reflect that. I don’t want to feed into the “I went to the woods and mountains and isolated myself” There are people who wrote music as a day job and wrote some of the best songs ever. You don’t have to be Townes Van Zandt or Jeff Buckley.

But at the same time you have collaborated with Xasthur who is the definition of crazy tortured artist…
Marissa: But look at the timeline. There was a distinct departure in my mindset and personality from 2009 when I was just a mess. When I collaborated with Xasthur I was drinking a lot. After 2009 I signed to two great labels and got a job as a special needs art teacher. Scott Connor… I really like him. He’s really legit. He’s not a fucking hipster. A lot of people put on the cape and claim to be black metal, but one thing I will say about Scott is that he s the real deal – a dark motherfucker! That was fun. He was chain smoking watching me sing and letting me do whatever I wanted. He was pretty rad.

That ties into something else I wanted to ask about. Obviously you are not a metal musician, but you have had ties to metal for years. What has your relationship been like with metal music?
Marissa: I started out really loving the band Earth because I was on the same booking agency as them in ’05. I always liked dark heavy music. I’m not sure about the world metal because there are so many genres I’m not crazy about. I really like droney black metal and bands like Locrian, Earth, Sunn. I wouldn’t say across the board I’m a metalhead but I would say that people who like metal – especially black metal like my music because the subject matter is fairly bleak and dark and obviously shares some influences even if it presents itself differently.

Before the interview you started you said you loved cats. Do you want to talk about cats?
Marissa: I love cats so much. I’m home for two days since I live in Boston. The tour is in the Northeast right now and I’ve gotten to see my cat Twila, she’s a very tortoise shell, she’s very vocal and adorable. Cats are my spirit animal; they are independent and keep to themselves. What do you like about cats?

With my kitten, who is just a baby, it’s really empowering to have something that so clearly loves you and that is just so stupid…
Marissa: I don’t think cats are stupid! (Laughter)

Well mine is six weeks old!
Marissa: Give him some time – they are smart animals!

I found having a cat has really helped me with depression because it has shown me that something is reliant on me. Do you find the same with your cat?
Marissa: I know exactly what you mean. Having somebody else rely on you is a nice feeling .It’s easier for me to take care of other people instead of myself. I’m a nurturer. I put myself last. I’m trying to work on that a little. That’s not a self sustaining MO!

Related to that – I definitely had a point where I started to realize I was putting myself last – did you have a point like that ever?
Marissa: Yeah. I think I’m still realizing that and learning how to say no. It’s weird. My inbox was like a ghost town forever but as soon as you have a little bit of press and people give a shit about your music there is a bombardment of solicitations. I always want to be nice to everybody, but I’m trying to learn how to look out for myself and say yes or no based on what I want, not what I want to do to make other people happy and like me. I have to unlearn that weird trait of wanting everybody to like me. Not everybody is going to like what you do. Who gives a shit? It took me a long time to learn that.

I feel like putting yourself in a medium where you are constantly judged would make that hard to deal with…
Marissa: It’s just par for the course I guess! I have accepted it. I think as a female musician there is really an added pressure to fill a void. If you’re demanding you’re a diva and bossy. I know exactly what I want and I can’t afford a sound guy because I brought a band instead. One out of three nights it’s like “Lady, I know what I’m doing.” Its unbelievable shit, they assume it’s my first rodeo. I’ve come to accept that I don’t care if I’m making the best impression because it’s a job after all!

What do you love so much about music?
Marissa: That’s a hard question to answer. I love how unifying it is, how it brings people together and expresses things you can’t express with words. It congeals memories. It soothes you and matches your mood. It can do so many things. I feel the same way about art. Without those things life wouldn’t be worth living.