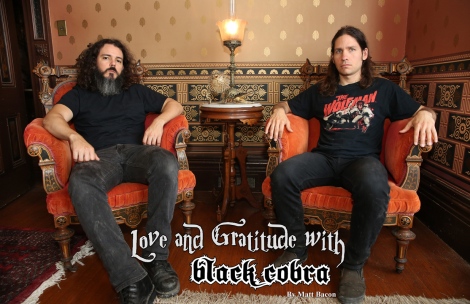 Rafael Martinez is  distinctly good dude – in my chat with him I got the impression that he’s just happy to be here and sharing his music with the world. It’s hard to believe that music as demented as that of Black Cobra could come from someone with such hope in their heart.

So how Raffa, how are you?

Raffa: Good! This tour has been awesome! We’ve been wanting to tour with the Yob dudes in forever so it’s great!

What is it like to be on the road with such a critically acclaimed band?

Rafa: I don’t read the press much, but I’ve always loved the band and I love that they are getting acknowledged. I’ve known Mike Scheidt for thirteen years and from the beginning I was always very impressed with the music and they should have been huge from the start in my opinion but sometimes it takes a while for people to catch on. They’ve been a big influence on me for a long time.

You said you’ve known Mike for thirteen years… how did you meet him?

Rafa: I was tour managing this band Lost Goat and we played the Samurai Duck in Eugene and they didn’t even have any music out. They had one song on a compilation for a magazine from Europe. I kept listening to it though and then Elaborations in Carbon came out. Then I played with him a few years later with another band. We would always hang out when we were in the same area and when Black Cobra started we started doing shows together here and there. There was that stop when Mike did Midian for a little bit, and we played with Midian too. There growth has been awesome and it’s awesome to see so many people getting into it since people weren’t aware of them for so long.

Why do you think this type of music is more popular than ever now?

Raffa: Things come in cycles. In the early 2000’s there was a lot of sludgy doom going around. I don’t know if there wasn’t enough labels pushing it or what. Relapse wasn’t that big back then. Metal wasn’t cool then. People were wary of it. Doom and metal go hand in hand.

Rafa: Apparently! I think Sleep playing again and coming out to play new shows has opened people’s minds to explore that world more than before. Sleep is playing an album that was released twenty one years ago, Dopesmoker and it’s still holding up. People know the legacy of it. This thing that was made twenty years ago is almost classic rock.

And I can listen to Sleep with my dad…

Rafa: Exactly! It has that timeless Sabbath element that has been reinterpreted in a modern way. We’ve done a couple shows with Sleep and we’ve toured with High On Fire. Being from San Francisco helps too – we’re all like family there. I’m really happy for them too because they never really got to reap the rewards that I think they deserved twenty years ago. Finally people are now getting to realize how important that was. Obviously it was because of how many people have been drawn to it.

You mentioned tour managing earlier… do you do that a lot?

Rafa: Oh no! That was just a onetime thing. Lost Goat were friends of mine and I wasn’t in a band at the time. They just invited me along. It wasn’t a big thing.

What do you do when you’re not on the road?

Rafa: I drive a truck and I run a studio. I’ve been doing delivery all over San Francisco since I moved there 15 years ago. Now that the band is a little more active we’re able to sustain ourselves a little bit more.

Do you think you’re getting to the point where you won’t need a job?

Rafa: It’s getting close now. Our popularity has really grown in the last couple years and we are able to get enough tours throughout the year that we don’t need to work as much on the road. It’s a job.

Rafa: I love it. I used to travel all the time with my family when I was a kid. It’s in my nature I guess. I love doing it, playing in new cities, meeting new people, finding new clubs, it keeps you on your toes. Every day is an adventure. It helps you become a better musician. You have to do well under any circumstances.

What about your relationship with Jason? At this point it must be like a marriage…

Raffa: We actually grew up in Miami together, I’ve known him since 1996! I moved to California and he was living in New York after we lived in Miami and we kept in contact as friends. He was playing in Cavity, I was playing in Acid King who I still play with here and there. In 2001 I had an idea to do a long distance band as an experiment. We didn’t want to tour or put out albums. Jason and I have very similar taste in music and Miami has a very small underground culture. It goes beyond music too! So I just said ‘hey man let’s experiment and see what happens!’

Rafa: We’re both really into horror and science fiction. Obviously Black Cobra has a major science fiction vibe. I like a lot of physics and science and also history. We’re into a lot of classic horror too. I think metal and horror are very close. There is something very tied into it there.

By extension on that… what do you think draws people to Black Cobra?

Rafa: I don’t know! In the beginning being a two piece there weren’t many two pieces around, there was only really Jucifer and Lightning Bolt, but Lightning Bolt was more artsy. We played loud intense music and people that like things that have that kind of substance really like what we do.

Rafa: It’s a mystery. It hypnotizes you. I think it goes beyond the boundaries of space and time when you listen to music and truly feel it you forget about everything else. When you’re in the moment nothing else matters and that’s what makes you save up for a month so you can buy a ticket to see your favorite band or how you can’t wait to hear a new album because it touches your soul in a way that nothing else could .Growing up listening to my favorite bands who did that for me and the fact that I’m doing that now for other people is huge for me. It’s a very selfish thing, you play music for yourself as something that you have to do, it’s a need and a means of expression and creation. When people tell you how much they love your work that’s amazing. There’s no physical explanation. It’s a spiritual thing on a vibrational field.

Do you have any last words of wisdom for me?

Rafa: Be good! Do what you love and be true to yourself! Be cool to people and yourself before anything. There’s a lot of bullshit that comes at you and how you handle it defines you. Try to keep upbeat as much as you can be grateful for what you have. You don’t realize how bad the rest of the world has it. The fact that we can even be here with these friends and people is awesome and it could stop tomorrow. Make the most of your days!