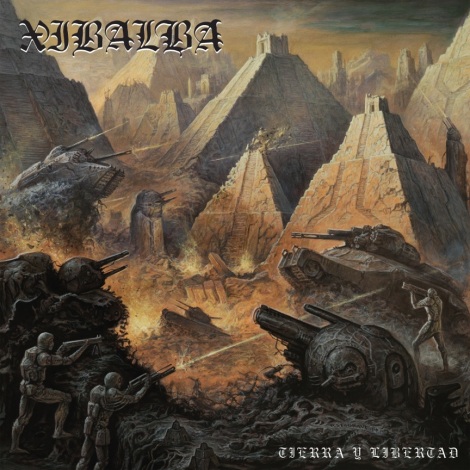 Hardcore as genre tends to have the unfortunate habit of falling prey to its own tropes and as a consequence experiences periods of creative stagnation. Currently it’s in an upswing, as the last few years have yielded many amazing breaking out artists, who have generally been transfusing new crossover blood into genre. Expire, Nails, Harm’s Way and (my personal favourite) Incendiary are just a few examples of this, but at the end of the day those bands merely have a series of really good, but ultimately formulaic, thematically disjointed mosh anthems. In their defence, this contrast is only vividly obvious to those who (perhaps unfairly) put these mortal legends side-by-side to the Ponona, California demigods Xibalba.

For those curious why whispering their name has sent an omniscient chill down your spine, it’s because it actually translates to “place of fear”, which is fitting analogy for where their third album, Tierra Y Libertad (Land & Liberty), will take you .For the uninitiated, their two previous genre bending albums and left a closed fist imprint on the genre in 2010 & 2012. By the power of raw, unprocessed production, and utilization of 90’s head banger’s death metal guitar/percussion aesthetics, with the bleak desolate ambiance Darkthrone era black metal and auditory death sentence-beatdowns, delivered with the vigour of rebellious freedom fighters. This analogy is very appropriate for Tierra Y Libertad, which fully embraces Xibalba’s staple feral ferocity and Spanish heritage by having all of the song titles in Spanish, which add an interesting level of mystery to the themes and metaphors that are clearly at play within the lyrics and war-zone album cover.

The first track Emerigo coveys this perfectly by immediately putting the listener into a machine gun-riff firefight, which transitions into some merciless chugging and a cold-blooded bridge will likely trigger their fight or flight instincts. For those that choose the former and make it to the second track Guerrila, expect to be welcomed by a nationalistic freedom fighter’s pledge that gives context into a old school metal segment anthem that would make Selpultura proud while inconspicuously building the song’s groove. The energy rises to such a crescendo that the ending bridge breakdown projects such delicious rage that simply hearing it will likely be bad for your blood pressure. This may sound like business as usual to older Xibalba fans, but the biggest surprise awaiting them is the closing track El Vacio. This somber 12:43 sludgy, doom metal epic may be the least overt side of Xibalba expressed to date. The initial dreaded and minimalism of this track does an absolutely hypnotic gradual rise in ambiance through the hollow guitar melody and seemingly perseverant but thematically powerless chugging that will definitely earn Xibalba new fans.

Best track? Practically all of them, but my personal bias leans towards Invierno, En Paz Descanse, and of course the blood boiling Guerilla.