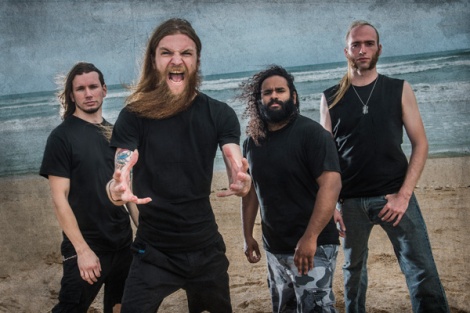 Battlecross have started to carve out their own spot in the scene as a sort of ‘gateway band’. Sure they’re no Metallica, but when it comes to group ushering fans into the world of death metal it seems that there is no better option than Battlecross. These guys have a decidedly accessible sound that’s a lot less alienating than the music of many of their peers. Suffice to say, I was pretty excited to finally get to check them out live, and so after patiently waiting through a few solid opening bands, flirting with girls (Battlecross has some REALLY attractive female fans) the time had come for true heavy metal oblivion to come upon us.

The band came on stage and immediately broke into some wonderfully blazing death metal atrocities. Yet the thing is, Battlecross don’t have the sense of evil that dominates so many of their peers. Hell, they rarely ever tune down, of course they sound bouncy! These guys headbang and pull off traditional rock n roll stage moves throughout their set. In some ways its reminiscent of 80s thrash. These guys are clearly having fun on stage, and it leads to the crowd having fun, which of course, feeds back onto the band. There is a beautiful cycle seen here that proves to me at least that Battlecross know exactly what they are doing and what kind of fan reaction they’re after.

With Kyle Gunther’s regular cries of “Headbang” or “Windmill” you start to get a sense for what kind of band these guys are. His charismatic stage presence, featuring lines like “Do a bump every once in a while and I won’t judge you!” leaves fans smiling and oftentimes giggling at his antics. The thing is, the dudes in Battlecross are clearly out to have a good time. In a scene that often takes itself far too seriously this is really refreshing. These guys, if nothing else, will make you smile and guide you through the asinine bullshit that might otherwise define your day. Watching a band this tight and this hungry jam out from front and center is an experience like no other.

All of this is to say that I thing I have never headbanged harder than I did last night. With hair flying and bodies surfing all around you got a definite sense that Battlecross are on to something special. These guys with their whirlwinds of hair and epic choruses scream out onto dozens of fans who know every word. Sure that may not sound like a lot now, but a storm is brewing. Battlecross are veritable metal masters and watching them last night turned me on to something truly special. As they closed out their set with the cover of the Slayer classic War Ensemble I felt a sense of confirmation, Battlecross are metal masters, and they are going to be impossible to stop.