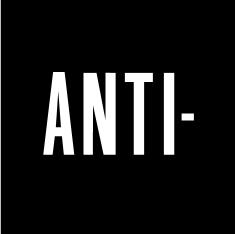 Taking stock of the year 2014, at Anti-  they are immensely grateful to have worked with such a group of talented and visionary artists. While this year’s releases couldn’t have been more varied stylistically, they are consistently soulful and imaginative. We hope you agree. 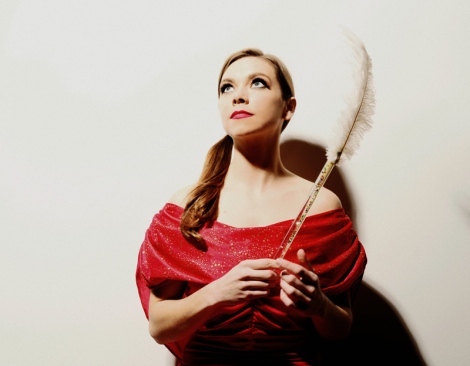 “The debut album by Arc Iris makes me happy — not only for its musicality, sense of adventure and ample wit, but for Ms. Adams’ willing to share her joy. There’s no sense in resisting it, so lean back and surrender to the delight that is Jocie Adams and Arc Iris.” – NPR

THE ANTLERS – In seven years, The Antlers have created a quiet revolution in thought and sound with their harrowing and often haunted tales of love unmoored, human frailty and emotional evisceration. On Familiars, the Brooklyn band have resumed the journey they began with 2009’s Hospice, picking their way through a labyrinth of fear, doubt, love and loss against a backdrop of layered textural songs that were as deeply atmospheric as they were anthemic.

“Against all odds, they’ve become one of the most interesting indie rock bands working, and the stately beauty of Familiars is the latest satisfying effort from a band that continues to reward those listeners who give them the attention their elegant, secretly weird music deserves.” – Pitchfork

BROKEN TWIN – The pseudonym of 25-year-old Danish songwriter Majke Voss Romme,Broken Twin’s debut album May is very much one artist’s labour, an intensely personal work that adheres to a singular vision. The dramatic sound is comprised primarily of piano, strings and Romme’s beautiful and moving vocals.The record was self-produced by Broken Twin and mixed by Ian Caple (Kate Bush, Tindersticks, Tricky) and Brian Batz.

CHUCK E WEISS – Los Angeles legend Chuck E. Weiss began recording Red Beans & Weiss in 2012 with strong encouragement by his friends and mentors, Tom Waits and Johnny Depp, who are executive producing the album, which all consider to be his best work yet. Weiss began his career playing drums in hometown Denver, where he was discovered by Lightnin’ Hopkins and proceeded to tour and record with legends, including Hopkins, Dr. John and Willie Dixon, who once said of Weiss something along the lines of, “Ain’t ya got ears son? That boy with the big old head be one of the best musicians in this town, this country even.”

DANIEL LANOIS – Flesh And Machine, the new recording by renewed musician, producer and sonic explorer Daniel Lanois was initially conceived as an ambient album. Tracks such as ‘Forest City’ take the classic Brian Eno albums that he worked on as a wonderful bedrock to stand on to see the sonic future. The album absolutely  bristles with new ideas and offers powerful evidence of Lanois‘ standing as an influential purveyor and innovator of experimental electronic music.

“Flesh and Machine remains a captivating release in its own right. This is ambient music with the capacity to excite, engage, and evoke.” – PopMatters

JOLIE HOLLAND – On Wine Dark Sea, Jolie Holland embraces the live-studio rock approach of the 60’s and 70’s, and transforms it with her unmistakable touch. Loosely inspired by Neil Young’s Zuma, with nods to The Velvet Underground, the Stones, and Bowie, this playful dialogue gives way to Holland’s most grounded work. Some of the lyrics were written tipsy on a train, others out of a trance state–every one drawn from the seemingly bottomless well of her muse.

“Wine Dark Sea is the most aggressive, colorful, and dynamic batch of songs she’s made since her 2003 debut. Her voice is a stunner—pretty, precise, by turns breathy and guttural, and always assured. “ – Chicago Reader

LOST IN THE TREES – When Lost In The Trees set out to record Past Life, they knew they needed a break with the past. Frontman Ari Picker looked to move beyond the themes of loss that fueled two emotional, densely personal collections of songs. For the new album, the band was pared to a lean electronic-rock four-piece, and in this new configuration Lost In the Trees took to the road to workshop the songs that would become Past Life. The arrangements are modern, spare, minimal, emphasizing groove and rhythm, blending the sonic architecture of 21st century electronic dance music, the austere emotion of the minimalist composers, and the sensual swerve of post-Bowie 80s pop.

“Enthralling and more than a little spooky, the third Lost in the Treesalbum features a downsized lineup (from six to four members), but the band’s ethereal essence remains the same. Leader Ari Picker’s elegant orchestral pop is the perfect vehicle for his sweetly melancholy voice, echoing John Vanderslice’s best work in its effortless embrace of profound unease and deep yearning.” – Mother Jones

MARKETA IRGLOVA – Muna, the second solo work from Marketa  Irglová (The Swell Season, The film Once,) takes the Oscar-winning singer’s music further into the realm of the ethereal. A document of spiritual searching, the album was written over the course of a year, and recorded in six months with producer/engineer Sturla Mio Thorisson, it utilizes full choral, string and percussion sections, plus guests Rob Bochnik (The Frames), Iranian daf player and vocalist Aida Shahghasemi, and Marketa’s own sister Zuzi on backing vocals. All told, the album’s cast-list runs to some 27 players.

“Irglová unfurls her tremulous voice on her new album, Muna, with dream-laden folk songs such as “Fortune Teller” and “The Leading Bird” draped in elegant folds of piano.” – LA Weekly

SAINTSENECA – Saintseneca is a young band led by singer-songwriter and multi-instrumentalist Zac Little. Their Anti- debut album Dark Arc follows in the footsteps of heartland bands who have sought to twist the music of the old weird America into new shapes – from the Violent Femmes to Neutral Milk Hotel – Saintseneca perform songs that sound familiar and uniquely original. The group utilizes a wide range of acoustic instrumentation (balalaika, mandolin, dulcimer, Turkish Baglama, floor percussion) with more contemporary elements such as synthesizers and electric guitars to create a seamless blend of soaring vocals and vibrant post-punk energy.

“Saintseneca is a band apart. Led by multi-instrumentalist Zac Little, they play a unique brand of folk-inspired post punk that has an aged patina but is as sharp as a brand new knife. On Dark Arc, the craftsmanship and lyricism reveal a uniquely singular band informed by Appalachian mountain music and the explosive recklessness of punk.” – American Songwriter 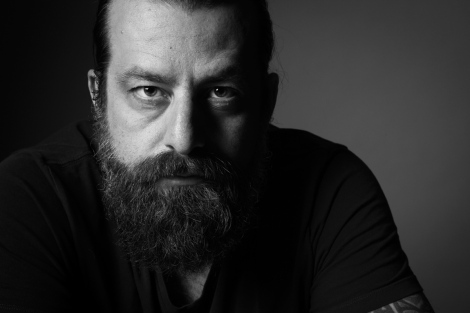 SEAN ROWE – On his latest album, singer Sean Rowe has created a beautifully primal work. For Madman, which he was self-producing, Rowe wanted to strip away much of the production and focus instead on the voice and guitar style he had perfected in theaters, nightclubs and living rooms. This is a record of extraordinary honesty intent on establishing a connection. In its deliberate simplicity there is pure sonic emotion.

“Madman is full of foot-stomping, hand-clapping, raise-the-roof tunes influenced by gospel and Delta blues – at once sacred and uholy.” – Time Out New York

SIMIAN MOBILE DISCO – Simian Mobile Disco trekked out to the Southern California desert, taking with them their new live set up – two modular synths, two sequencers, and a mixer. Over a period of three days, they jammed and rehearsed in the desert, culminating in a one off sold out live show at Pappy & Harriet’s, Pioneertown, allowing 900 fans to witness part of the recording process. Those sessions, taped under the desert sky, became the basis for their brand new album / live project Whorl.

“By challenging expectation and keeping their sound fresh, Whorl is a progressive and bold gesture, making a case for SMD to be considered for a place as pioneers in their fields” – Crack Magazine 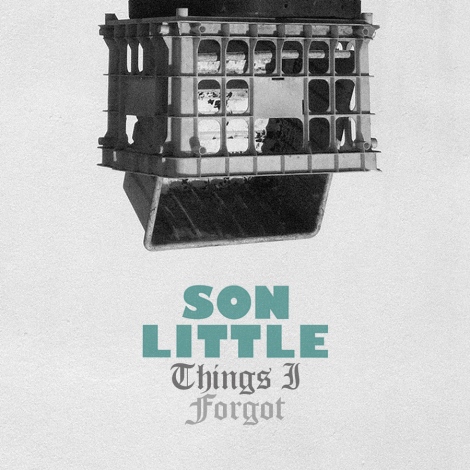 SON LITTLE – Son Little was born in Los Angeles to a preacher and a teacher. He absorbed songs from dusty family records and learned saxophone and piano. A move to New York introduced him to hip-hop, basketball, art, and recreational substances. A move to Philly introduced him to the legendary Roots crew, he played music with them and they put his voice on an album. He also collaborated renowned producer-musician RJD2. And now he has a chance to display the range and vision of his artistry, expertly demonstrating the threads that tie together the many strains of what we think of as “pop music.” From a Prince-like driving rock to a Curtis Mayfield sly groove, Son Little’s Anti- debut EP Things I Forgot is  filled with all the internal mash-ups and contradictions that make American pop music great. READ  OUR REVIEW HERE

TINARIWEN
For Saharan blues band Tinariwen, the desert is their home, and their hypnotic and electrifying guitar rock reflects complex realities of their homebase in North West Africa. Due to political instability in their country, the band recorded away from their homeland for the first time, setting up shop in another desert: Joshua Tree, California. Recorded over three weeks in studio built in a house in the region known for spaced-out rock ‘n’ roll and psychedelic cowboy folk, Emmaar showcases an organic feel from the rolling hand drums and meandering guitars of album opener “Toumast Tincha” chants to the galloping beats of the forward-marching “Chaghaybou.”

“Remaining true to your identity while also evolving and keeping an audience that’s always a moving target interested in you is a tough gig. OnEmmaar, Tinariwen are up to the task.” – Pitchfork

Jeff Tweedy, best known as the founder of the pioneering Chicago rock band Wilco, has released a new album through his own dBpm Records. The album, Sukierae (sue-key-ray), is not quite a solo effort. It is the debut release by the aptly-monikered duo, Tweedy, which features 20 new Jeff Tweedy-written songs, performed by Jeff in a musical collaboration with his 18-year-old son and drummer Spencer Tweedy. “When I set out to make this record, I imagined it being a solo thing, but not in the sense of one guy strumming an acoustic guitar and singing,” Jeff said. “Solo to me meant that I would do everything – write the songs, play all the instruments and sing. But Spencer’s been with me from the very beginning demo sessions, playing drums and helping the songs take shape. In that sense, the record is kind of like a solo album performed by a duo.”

“An album of great depth and richness, Sukierae finds Tweedy at his most dignified, addressing life-changing events across all aspects of the full emotional spectrum.” – Uncut

FIND OUT MORE ABOUT ALL THESE ARTISTS AT