You guys just got back from Europe, how did it go?

Jeremy: It was great! It was more vacation than anything else, just a one hit scene festival, and then just sat our asses on the beach.

Sounds like a dream! You guys were in Europe the spring as well right?

Jeremy: Yeah we did a headline tour in the UK and in Germany and  headed up another tour last year in Europe. The return to get a little memento there is pretty fun.

Is there any particular place in Europe that you just love playing?

Jeremy: Germany has been great to us, right from the get-go which is  encouraging to see that kind of enthusiasm. The whole scene went really well they really have enthusiastic fans for rock n roll music. Which is a little lacking North America. 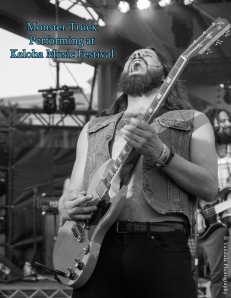 It’s starting to pick up a little bit here in Canada,  I find a lot more rock and roll band emerging.

Jeremy: Yeah I kind of see  it going in the other direction,  yeah but it’s a matter of perception. Rock radio is taking a huge s*** right now,  and everybody switching formats. It’s kind of disappointing to be honest. That being said, there’s definitely a lot of great bands,  I just don’t think and I’m not really sure that mainstream media and the general music going population are reacting as strongly to the quality of music that’s being put out. There’s still time to turn it around and I think that as it grows from the band and artist perspective it takes a little longer for everyone else to come around.  so there definitely solid groundwork being laid.

I agree mainstream radio is kind of taking a dive, and for that matter has been since the eighties. But that being said most people I know do not listen to mainstream radio. They listen to independent radio stations because they more likely play better music- in that essence people are reaching out more too. For example, I’m in MTL and I listen to K.103.

Jeremy:  Yeah that’s something I’ve noticed very much from Montreal we for sure had our share of challenges. I think that is something kind of natural because of the mainstream success in the rest of the country it is kind of taking a little bit longer to get things going over there do to the fact people don’t tend to pay attention to that. We had to do it more from the grassroots level we’re most used to, and it’s starting to get us a little more momentum as far as getting people out to shows now.

Speaking of momentum, this summer/fall you’ll be touring with Alice in Chains, that’s pretty amazing!

Jeremy: Yeah we’re doing another run with them, this would be our third run with them. It’s kind of  the smaller out of the three we’ve done, so it should be good. It’s in a a lot of s*** areas in the United States that we don’t have to go to, but we always like touring with Alice in Chains- great Canadian market that really make it worthwhile for us.

I remember a few years back seeing a poster for you guys, I think you were playing a show at the big O, and I literally thought it was for a rally. After it dawned on me that, there was no destruction, but in fact a band I looked you guys up.

Jeremy: Because of that we’ve received a little recognition, just from people being curious about the name.  It’s kind of funny  because it gets a little weird looks and questions in North America but everywhere else people kind of eat it up. Whereas in the United States especially we have to justify it,  or they need to get over it at first. It’s not something that I can just get behind,  they actually have to see the band in person. It takes a while for people to let go of their initial reaction of being something stupid. (laughs) So that has been something that’s been a bit of a hurdle. In the UK and  Europe they’re kinda like how did you get such an awesome band name, and then in the states they’re like: why did you name the band that? It’s interesting to see the difference initial reactions from the different areas.

How did you guys actually come up with the name?

Jeremy: It’s nothing really, no story behind it  other than you should name it Monster Truck, and it was taken. That’s pretty much the extent of that.

Well, it works for you guys. You literally have this monster sound, if someone were to ask me how you guys sounded I could go on and on about influences but in reality I would just refer back to your name. Even when I first listened to your album on my little Chrome Book it still maintained this massive sound.

Jeremy: One of the biggest challenges is making an album make it sound good on anything,  and  I feel as though we did a pretty good job of that.

Just out of curiosity did you record on tape?

Jeremy:  No, but we mastered to tape. We had our hands a little tied while doing the recording of this record.  You see, we already attempted one time and failed. So we were kind of under the gun,  so when it came to affording expensive things like tape it just wasn’t in the cards. But we were able to master to half inch, and it kind of gave us this more round sound. We actually weren’t really set on it until we actual heard it. We were presented with both, we didn’t  know which one was which and chose which sounded better. And that happened to be the one that was mastered to tape.

Not to sound too cliché, but how did you guys come together to form Monster Truck?

Jeremy: Basically a bunch of friends coming together, playing just to have some fun. It just accelerated at an unrealistic pace at the time for us. we had to make the shift from being weekend thing to a full time thing.

You guys haven’t been around all that long, did you guys ever imagine doing a big tour like that? OR even playing huge stadiums?

Jeremy: No that was never the intention. So no I never imagined or anticipated by any means. When it started happening it was exciting and surprising and we’re still kind of in awe from where we’ve come and what we been able to accomplish from something that was only meant to be for getting drunk and having fun in our hometown.

I know you need to get going to get ready for your set tonight, but any last words?

Jeremy: Yeah I want to mention that last two records are always free download on are website- just go to ILOVEMONSTERTRUCK.COM