Living in Toronto’s Downtown the proper outdoor festival experience is something hard to come by (inside the city at least). TURF is therefore a most welcome new tradition for those of us who love binging on live music in the sunshine. This was only the second T.U.R.F. (Toronto Urban Roots Festival) and I must say that for a very young festival it is already an amazing talent magnet for TO and it was actually quite well organized, which is often a main worry when it comes to younger festivals. Put in grander terms it is the best outdoor festival downtown Toronto has conjured in years. Bringing in brilliant acts, from every level of notoriety, for convenient consumption in the heart of downtown Toronto. In fact, all of the best independent acts performed on a smaller side stage on a hill, giving the performances there an intimate cathedral like quality.

Hands down my favorite acts of the festival where The Strumbellas, Black Joe Lewis and Man Man. They all played this lovely little stage which simultaneously over looked Toronto’s historic Fort York, this was of course juxtaposed by the ugly bottom of the highway. Some other personal highlights of the festival for me were The Violent Femmes, Gary Clark Jr, Neutral Milk Hotel and Gogol Bordello, the point being, this festivals line up was stacked. I saw guitars smashed, I got wine thrown on my lens, I crowd surfed and I made new friends. So here’s hoping that TURF continues to grow into a happy, healthy, crazy festival.

Especially in Toronto, their home turf (teehee), The Strumbellas live show has some serious vibrato to it. The Strumbellas fabricate a certain kind of hive mind, both with their remarkable music but also with the connection they establish with the audience. This is some of the best ‘rock’ music for a big crowd setting, partially because there are so many memorable lines to chant along with the band, giving the whole experience a very communal feel. It is, however, also because of the obvious earnestness with which each one of them, put simply, plays their freakin hearts out. Playing back to back, screaming into the same microphone and jumping into the crowd, The Strumbellas are genuine entertainers. The Strumbellas are a Juno award-winning band from Toronto and has been slowly but surely growing its brand as the folk-country rock band to measure up to. They have an amazing symphonic wall of sound paired with inspired compositions and truly poetic lyrics. Of course their live show is the real treat to be had.

Their music combines good old school rock and roll sensibilities with complex layers of folk not to mention an overall epic orchestral feel added by their spectacular violinist Isabel Ritchie. They use complex chord progressions, gang vocals, emphatic rock drums and sparse but vigorous pop soloing. This all adds up to an innovative blend of new music compounded by front man Simon Ward. He is a sincere songwriter with a serious stage presence. Sporting a giant sun hat and no shoes for most of the set. One obvious highlight of the set was when Ward actually threw his guitar into the stages lighting, over twenty feet into the air, and broke part of the body of his guitar. The crowd has was struck. Of course the duct tape lining the body of the guitar was a good indication that this was not this particular instruments inaugural flight. Other members of the band actually piped in after this spectacle about having a mild fear for their own lives.  Keys player Dave Ritter also added a particularly warm and joyful presence on stage. Ritter is a large man, however his size is greatly overshadowed only by his seemingly endless well of energy, he head banged, foot stomped and key tickled like a madman throughout the whole set. This band is well seasoned, road hardened and ready for more. The Strumbellas are coming out of their shell and are surely on the rise, be sure to keep track of their constant tour schedule. 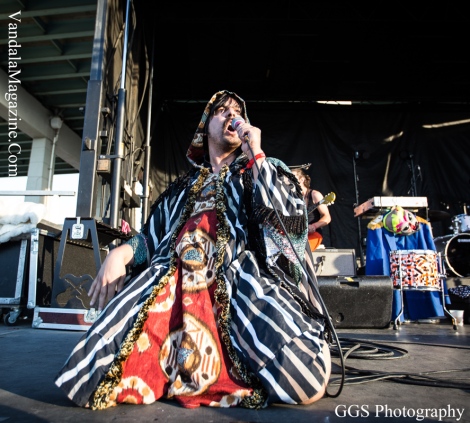 Some people fear change, but most music aficionados embrace it. Some times you stay within your comfort zone and sometime you tread water listening to the same dependable acts of your past. Occasionally, however, you need to jump into the freakin deep end, after all this is the only way we can expand our horizons. Speaking of such things Man Man is one of the most novel musical acts I have witnessed in years. I had never heard or seen of them before they went on stage. As I walked over to TURF’s south stage I heard people extoling the virtues of Man Man, so I inquired as to what they where ‘all about’, all they said was, ‘you have never seen anything like this before’.

This is actually one of my favorite factors when it comes to attending festivals, the odds are you are going to be exposed to music you have never heard before. Discovery of amazing new bands as they whollop on stage and into your ears is one of my favorite things about music in general. I know that we all have access to the internet 24 hours a day and that almost every band has music available up here, but if you have the opportunity and the will power it is sometimes important to just let the band make its own first impression. Man Man delivers blistering experimental rock music fuelled by the fire of chaos punk jazz combined with what could be described as a slightly insane stage presence. Front man Honus Honus (that’s right) came on stage with a crazed glint in his eye that seemed to convey a combination of extreme confidence, motherly pride and some sort of confusing sibling rivalry. Or of course I could just say he is a pretty weird guy. He truly performed, always seeming to be on the cusp of madness, in an array of hilarious costumes. These creative getups ranged from a bedazzled hippie moomoo to a white fur coat and a band conductor outfit combined with a rubber alien mask, just to name a few. The audience was simply

eating out of his hand, Honus strutted about the stage almost always the center of attention. He even stooped down at one time to awkwardly stroke the hair of several audience members. He also played some toy noise makers and pots and pans. Honus did take a back seat at certain moments. Several songs featured intense musical breakdowns featuring frenzied but calculated time and key changes where these players got to really let loose. Rivulets of frantic jazzy horn riffs and hysterical guitar careen into a waterfall of inventive jazz configurations housed by an immensely tight rhythm section, who carved out a grueling pace overall. This was all topped off by the eclectic punk rock vocals and tumultuous key pounding of Honus Honus. Their songs are epic, ridiculous and ultimately dynamic. This bunch of Philadelphia natives is currently on a huge tour of North America, so keep your eye on it if you’re in the mood for something you have never seen before come out and expand your horizons.

Every so often you encounter a band that reminds you why music is important to you. Black Joe Lewis and the Honey Bears is a band that affected me in exactly such a way. This is music that I had the pleasure of discovering several years ago, so I have been eagerly awaiting there return to Toronto. On their recordings their music translates into a polished, sparkling rock entity. Live, however, they are a sprawling funk rock beast, spewing raw talent, it was truly inspiring.

As a wannabe child of the 70’s I am obsessed with the archetypical titans of the era. Artists like James Brown, Maceo Parker and Otis Redding, so when music based on this era of (in my opinion) perfect music rears its beautiful head in modern times it makes me truly thankful. I believe that all genuine music fans long for a rebirth popular music, for a time of talent, not in producers but in their artists as well. Black Joe Lewis and the Honey Bears is one of few current bands which represent a small resurgence of the time when pop music was not a four letter word. People like Black Joe Lewis and The Honey Bears may be few and far between, those who bring the R&B, funk driven, rock of the past to our eagerly awaiting ears, but they bring hope to us true music lovers. This music is not only catchy and refined but it reminds us of a very important factor, a musical genre itself is never stale, it just takes the right artist to bring a fresh perspective to it.

A combination of classic funk, soul and modern rock music, Black Joe Lewis and the Honey Bears are not your typical retro throwback band. Although they do encapsulate many of the best things about 1970’s funk rock. This band blends elements of modern rock to create their own niche genre. Their songs range from funky bass driven party songs to grand rock anthems to slow soulful balladesque arrangements. They released their fourth full-length album last year, ‘Electric Slave’.

Their compositional style has a spirit comparable to something that Joe Tex or Wilson Picket might have accomplished in modern times. Songs like Booty City or Sugarfoot are so raw and high energy that I was actually tired by the end of them. Black Joe Lewis and the Honey Bears employ thunderously funky in your face bass lines woven in between resounding staccato horn riffs and stadium rock drumming. This coupled with the pure charisma of Joe Lewis’ roaring soul vocals, his jump-blues guitar picking and his larger-than-life chicken dancing makes for a truly unforgettable live show. Black Joe Lewis and the Honey Bears have performed at Coachella, Bonnaroo, Lollapalooza, Austin City Limits and many more. So the next time these talented Texans roll into your town I suggest you have your mind blown. They are currently touring all across North America.

Photos and Article By Gideon Greenbaum-Shinder