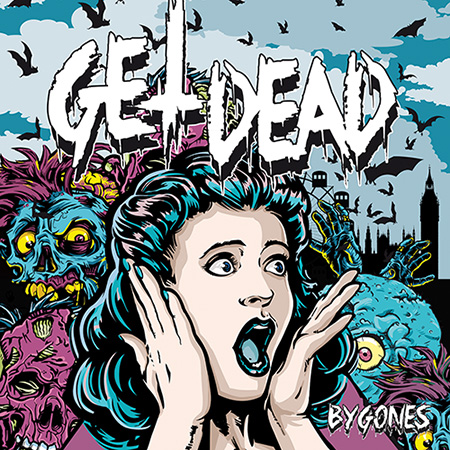 If polished, clean punk rock is like taking a pair of sharp scissors and a ruler and carefully using them to cut into a piece of paper, then Get Dead’s brand of gritty, heartfelt punk n’ roll is like taking that same piece of paper and ripping the f*cker with your bare hands. Straight lines be damned. It charges forth with excitement and is unabashedly forthright in its rumination’s on life, love and waking up on the wrong side of the pub floorboards.

Their 2013 Fat Wreck Chords debut Bad News is a perfect mix of hard and soft, acoustic and electric windstorms rushing through a forest of angst. It’s refreshingly honest and refreshingly gritty music in a genre that’s sounding increasingly polished all the time.

Bygones is the band’s follow up EP to Bad News and doesn’t betray the path they’ve set with that previous release. It also happens to feature some nifty, albeit dark as hell, cover art. Colored with neons and oily blacks, the cover of Bygones is a scene right out of a gothic nightmare on LSD.

Looming castles, jagged skies, bats with razor blade wings in attack mode. And a cluster of undead punks crowing the scene and reaching up for, what I can only guess, is human flesh. If I was the hot tamale female with the black lipstick in that scene, I’d be putting my lungs to work as well.

As for what the cover has to do with the content…I can’t say, as I haven’t heard the EP as of this writing, but I’m assuming it follows suit with the rest of the band’s catalogue: passionate San Franciscan punk rock devoid of compromise or pretension.

After all, this is a band who have featured similarly disquieting scenes on two of their previous releases. With one, a half naked girl in a bathtub, possibly and, quite frankly, probably dead, surrounded by an army of fallen Pabst Blue Ribbon soldiers, in disturbingly darkened water (just as disturbing if urine as blood). And the other, not to be outdone by the dead bathtub girl, a drawing of another half naked women stabbing herself in the neck with a butterfly knife and spewing forth blood. Wow. Parental discretion advised.

Get Dead are one of my favorite newer bands and every release has been unique and enjoyable. Here’s hoping that continues, along with the Heavy Metal meets Lars Von Trier artwork, well into the future.