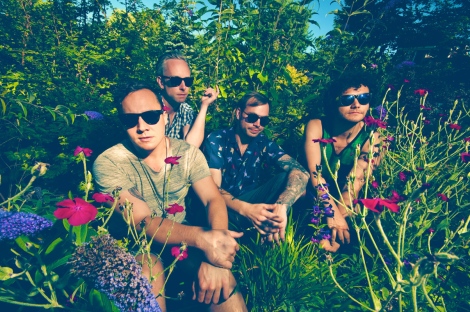 BESTiE is getting the summer sizzling with the sunny new video for their song Sriracha, which premiered this week on ETCanada.com. Along with the new video, the band released a remix of their track Foolish Hearts, by Kalibo – a new tropical electronic act from Vancouver. Listen here. BESTiE is also bringing their captivating live performance to festival stages in Canada this summer, with a run of tour dates in July and August (details below).

The video for Sriracha was shot by the band and directed by lead singer Tristan Orchard – who has previously worked as a filmmaker and worked on the group’s past videos. Filmed in Colombia – where the band’s drummer, Daniel Ruiz, is originally from – the band shot most of the video on the fly, improvising and casting people on the street along the way. The track comes from the band’s recently released debut album, No Bad Days (April 22, 2014), and will be featured on an episode of Esquire TV’s Best Bars In America. Fans can also keep an ear out for the album track Fell In Love With A Stripper, which will be featured on ABC’s The Fosters.

No Bad Days is an 8-track pop-rock record full of danceable beats and catchy melodies. The album features the infectious singles Pineapple and Asleep on the Bus, which were recorded at Greenhouse Studios with producer, Digory Smallz. The remaining 6 songs were recorded at Monarch Studios and The Menagerie with Juno award-winning producer Howard Redekopp (Tegan and Sara, Said The Whale, The New Pornographers, Mother Mother, and The Zolas).