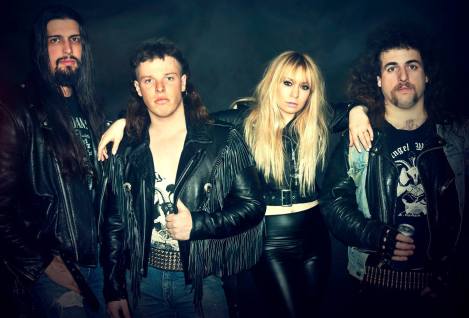 I think I fell in love with Reggies Rock Club one year ago, May 2013. It was a magical, booze-fueled romp through Chicago’s south loop, heading from from the hotel to the venue of Ragnarokkr Metal Apocalypse, the USA’s leading traditional metal festival. It was a bright day in the windy city and I was still buzzing from a breakfast of PBR tallboys and fried+folded steaks from Ricky’s Diner. On the opposite side of State Street was a dim patio, packed with black shirted/long-haired laureates, many clad in hesher vests.

A sign hung above the joint. It read thusly: Reggies Rock Club – “We’re not happy until you’re not happy.”

Fast forward to April 4th, 2014. Round two for me, round four for the fest itself. Riot and Grim Reaper the headliners, MC’d by Chastain’s Leather Leone, with support from other cult bands new and old, such as Black Death, Picture, Voltax and many more where that came from.

My Seattleite buddy Damian and I plow through a burger packed with mushrooms and a guzzle a handful of pints before the festival opens next door. We’re reconnecting with old friends and putting a few names to Facebook profile pictures. Best vibes. “Uncle” Bob Byrne (organizer of the festival’s second stage) is making the rounds with a big derpy grin splashed across his mug, snapping photos with everyone and informing the room at large that the festival is officially sold out. Huzzah! That calls for a few more rounds…

MetalUSAfer is opening to show at the main stage, with what seems to be an open love-letter to Heavy Metal, featuring two originals plus two covers (NWOBHM’s Virture, and Japan’s Metalucifer) complete with power-drill antics and guitar smashing – a short, raucous start to the festival that people will recount for weeks to come. Following them on the mainstage is Amulance, Chicago’s very own US-Power Metal heroes. The old guard are pulling their (ample) weight around with nail-biting riffs and nipple-riding bass runs. They close the set with “Seventh Son,” a deadly late-80’s screamer which is a personal highlight for yours-truly.

If you’re involved on “The Inside” of classic Heavy Metal as a band or promoter or anything else, then Ragnarokkr is equal parts “convention” and “music festival.” Friends both new and old pile through the doors of Reggies faster than I can shake their hands. The magic of the moment fully hits me  when members of Skelator, Eternal Champion and Borrowed Time and I crowd the second stage bar during Dogbane’s set of bluesy Helstarish material, quaffing round and round of Newcastle for one-another, swapping tour stories and buzzing about Conan the Barbarian and Cirith Ungol. Festival crowds and their regulars can have ties that run thicker than blood, but I have yet to feel more welcomed in a group of people than at Ragnarokkr.

Night Demon from California hits the main stage and the crowd waxes as the three-piece tears into a high-octane set of tunes lifted straight from the NWOBHM grimoire, plus a rad Diamond Head cover. My buddy Patrick asks “What did you think of Night Demon?” and I reply “Meh, they were Alright Demon” and he shoves a sweaty palm into my face before I can tell him I’m only joking. Back to the second stage for more beers and buddies. The guys from Eternal Champion and I are very loud and very rude during Dark Design’s set, in which they play tight & technical thrash, tied off neatly at the end with a deadly power metal cover of “Dust in the Wind.” We sing, we laugh, we cry. Lady Beast  comes on next and delivers some classic riffs with a tatted-up babe on lead vocals. Memories get fuzzy at this point. We duck out for the main stage after some goon in our party (who shall remain nameless) starts hollering “show us your tits! Unleash the terrible twins!”

Memories promptly unfuzz themselves at the main stage, where Canadian children of the storm Axxion are playing to a packed house. They have both the prettiest and the ugliest band members of the festival in tow, and that’s not even counting their singer’s mullet which he must have stolen from Geoff Tate circa ’91. Regardless, they totally rule. Their guitarist is wearing neon-orange Nikes that look like Megaman boots. He burns through his guitar strings at a million miles per hour and it’s just no big deal for him. Axxion sounds a little sunset strip at times but I get into ’em anyways.