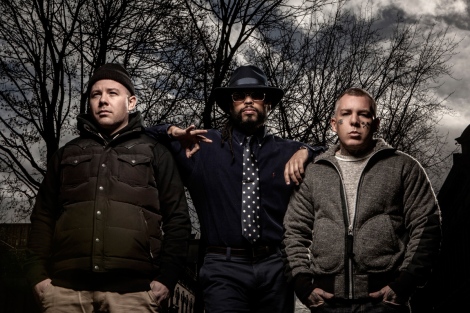 Swollen Members are back again with their ninth studio album, Brand New Day. The record will land in stores on June 17th through the newly re-launched label, Battleaxe Records. Check out the new video teaser for the album track, Cock Blocker, and pre-order Brand New Day now on iTunes, with an instant download of the title track, or online at shopbenchmark.com/swollenmembers with an exclusive t-shirt and collector’s edition vinyl record. The group has also announced the second leg of tour dates for their upcoming Canadian headlining tour, which will begin on June 5th in Nanaimo, BC (details below).

“With Brand New Day, Swollen Members have written a powerful new chapter in our history,” says Prevail. “We have all become forward-thinkers and our level of expression has benefited. This album is a landmark for us in that it doesn’t feature any guests. Our belief system has been renewed and we agreed that between the amazing production and the complexity of the lyrical value, we could let Brand New Day speak for itself.”

Since re-grouping in 2009 after a four-year hiatus, Swollen Members have been creatively revitalized, and their profile in the hip-hop scene has skyrocketed. The group’s independent grind is unrelenting as they have released three full length studio albums, a greatest hits collection, and followed up their critically acclaimed Monsters In The Closet album with a sequel. During that same time, Madchild and Prevail have both launched solo efforts while they toured the globe with the likes of Tech N9ne, La Coka Nostra, The Grouch & Eligh, the Vans Warped Tour, and Alchemist and Evidence’s new hip-hop group Step Brothers.