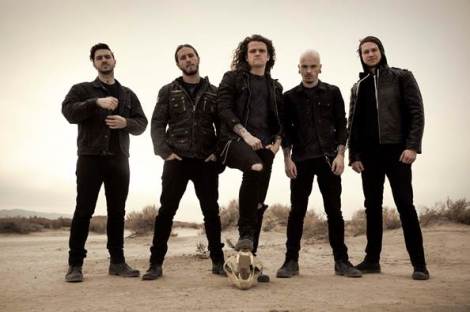 MISS MAY I’s blistering new offering, Rise Of The Lion, is set to hit stores in North America on April 29, 2014 via Rise Records (April 28 in the UK, April 25 in Australia). This is MISS MAY I’s fourth album and the first to be produced by the legendary Terry Date (Pantera, Deftones, White Zombie, Bring Me The Horizon). The countless fan letters the band has received over the years are the inspiration for the tracks on Rise Of The Lion, and each track is written from the perspective of those fans or responses to them.

The band slams out of the gate with a double dose of metal, offering up their brand new single ‘Gone’ along with its accompanying music video via the official Rise Of The Lion launch site, www.MMIRiseOfTheLion.com. Take a listen now and while visiting the site, check out the band’s three studio updates, as well as tour date information. Beginning today at the site, you can pre-order the album in digital, physical CD, and vinyl versions, as well as special pre-order packages including exclusive Rise Of The Lion shirts, necklaces, posters, and more!

“We wanted to release a video that showed the true bare bones of our band,” states frontman Levi Benton. “We really found ourselves on this new record and we felt we needed a video that had no bells and whistles and was just five guys jamming and thrashing. It also shows the creation of the album artwork, which is a real statement about MISS MAY I. The lion logo that is being tattooed represents our band as a whole.”

Levi adds, “‘Gone’ is about heartbreak and feeling like you are lost within that heartbreak. We know everyone has felt this, so as this record being letters back to our fans we wanted to address this. One too many times I have read a letter about someone feeling so broken they felt they felt like they couldn’t make it and that our music helped them find a way. This song is for them!”

The worldwide release of Rise Of The Lion will be supported by a brief headline tour of the United States this April and May, with support from For The Fallen Dreams. MISS MAY I’s “Up Close and Personal” Tour will stop in eight cities, including a closer in their home state of Ohio at Rock On The Range. Get this – each ticket price includes a copy of Rise Of The Lion hard copy CD!

After the resounding underground success of their debut full-length release Monument, MISS MAY I took a step beyond the metalcore world they had grown up in with the release of their album At Heart in 2012. The record, produced by renowned record producer Machine (Lamb Of God), proved to be one of the strongest and most surprising metal records of the last few years, spawning huge singles in the songs ‘Hey Mister’ and ‘Day By Day’. Entering the Billboard Top 200 charts in its first week at #32, At Heart saw the band embrace a more mainstream metal approach to their music. During their 2012 Vans Warped Tour main stage onslaught, the At Heart campaign made massive leaps, seeing MISS MAY I nominated for ‘Best New Talent’ award at the Revolver Golden Gods Awards, as well as headlining the Alternative Press 2012 Tour, and picking up support at Active Rock Radio for the first time. On the live side, the band was hand-picked for tours with the likes of Five Finger Death Punch, Killswitch Engage and Bullet For My Valentine.

To learn more about MISS MAY I, please visit www.missmayimusic.com and www.mmiriseofthelion.com.