The fact that most electronic, beat-driven music is instrumental turns people off because they crave an intimate connection with the artist that can only be satisfied with words and the human voice. Truth is, these electronic producers speak with sounds that they find to express themselves, perhaps even on a deeper level than they could with vocals.

Heavily influenced by the freedom of jazz, swing of motown, and clackety stumble-perfection of J Dilla, Shigeto’s rhythms are as abstract as they are grounded in discipline and respect to traditional forms of the aforementioned styles. Blanketed by clouds of rhodes, and found sounds, supported by thumping bass, he creates a rich, lush palette of earthy textures. As a talented and experienced drummer, he brings what a lot of beat makers fall short on, which is not only recording real drums, but also implementing a true sense of realism in terms of variety, space and nuance that is hard to replicate without experiencing, innately understanding such intricacies. 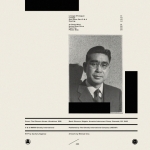 Lineage by Shigeto is a direct connection to his personal life. The cover photo is of his great grandfather’s house in Hiroshima, Japan in 1916. The back cover is of his great grandfather, Shigeto’s headshot from an internment camp in Colorado where Japanese Americans were contained for questioning after the attack of Pearl Harbour because many Americans believed that the Japanese were spies, or traitors. This reflection and grief felt through the photos is what makes Lineage a special listen beyond just beats. The pride of his roots and representation of the bloodline is inspiring. The word, Shigeto means “to grow bigger,” and he is well on his way with a new album coming out in late August in the midst of a North American tour. Make sure to check out his unique blend of live drums and electronics.