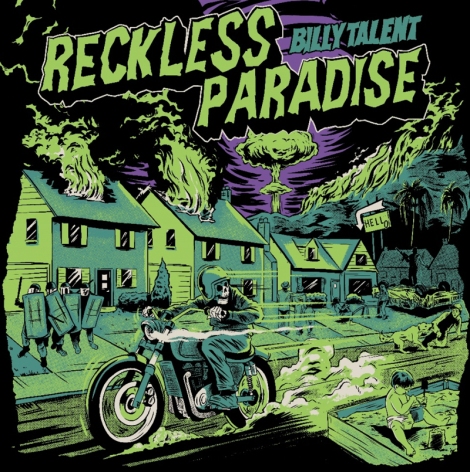 Canadian rockers Billy Talent have released the first official single from their forthcoming album, due out this fall.  The song, “Reckless Paradise,” showcases the powerful driving riffs and pointed lyrics the band is famous for.

Listen here or Below:

This single follows up on “Forgiveness I + II,” which was released as a surprise in November to great acclaim. “Forgiveness” quickly climbed into the Top 20 at Canadian radio, despite not being an official single from the band. It was also featured as the music in the first episode of the multi-part short film featuring UFC superstars Rose Namajunas and Donald “Cowboy” Cerrone that Billy Talent is releasing over the coming months.  Click here to watch episode one.

Billy Talent are one of Canada’s most successful bands. They have sold nearly three million albums internationally, including 1.3 million albums in Germany alone. They have won seven Juno Awards and have been nominated 23 times, including three nods for Afraid of Heights (Group of the Year, Rock Album of the Year, and Ian D’Sa for Producer of the Year). They have also twice been awarded ECHO Awards. The band has enjoyed tremendous success at Canadian rock radio where their 26 charted singles — including numerous #1, Top 5 and Top 10 hits have combined for nearly half a million spins in Canada alone. In 2018, the group was honored with a special Legends of Live Special Achievement Award presented by Canadian Music Week. What’s more, their hometown of Mississauga recently inducted the band to Legends Row, one of the highest honors the city can endow.