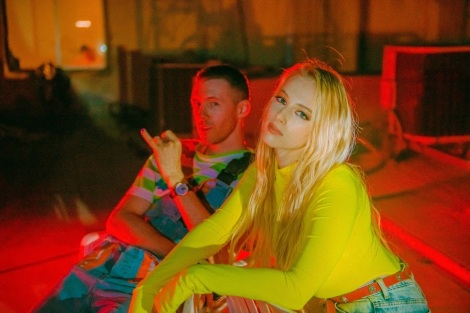 Pop duo Loote have shared their latest single, “All The F*cking Time.” A vibrant ballad on how everyone is needy sometimes. With the release of “All The F*cking Time” Loote also announces their third EP is set to be released in 2020, after the success of EPs single. and lost.

Emma Lov explains the story behind the single, “I was in a session with some friends, and I was going through my notes in my phone because HELLOOOO INSPIRATION. Anyway, I’m sitting there scrolling through my lil Rolodex of ideas when I see this one short one. It straight up just said ‘I just want you to want me all the fucking time.’

And I remembered writing it down a while back because I got into a heated discussion with my boyfriend over something silly, and I knew I couldn’t say that to him. Because it’s really extra, even for me. So I just left it there instead and forgot about it. and honestly? It’s my biggest downfall.

I’m needy sometimes. A lot of the time. I care what people think. Especially the people I love. I want to feel wanted. I cherish those moments when I feel like everything is perfect, and I’m loved and admired and someone wants me so much they can’t stand it. It’s almost embarrassing, but I can’t help it. If you love me, show me. Ya know? Made a fuckin dope song though.”

Emotions turn on a dime. In the span of just one Loote song, you might get up and dance, sit back down and let out a tear, or return to your feet and fall in love again. In a similar manner, the New York duo—Jackson Foote and Emma Lov—fashion self-described ​“cry jams”​ out of alternative, electronic, and pop elements. Bathed in the glow of neon production and artful instrumentation, the pair put on a different kind of party…

“We make music you can jam out to while you cry,” says Jackson. “It’s funny, but it’s true.”

“The songs are a vibe,” Emma elaborates. “I feel like we’re always in the middle. So many people are worried about losing themselves, finding themselves, and not knowing who they are when they come out on the other side. It’s a struggle I dealt with for a long time too. We’ve figured out how to talk about this in our music, because we found the right midpoint between these emotions. We exist in our own crevice of what you’d call pop.”

They occupy this space quite comfortably as well.

Since first united by a professor at SUNY Purchase College, these two kindred spirits have quietly positioned themselves for pop ubiquity. The group’s 2018 debut EP, single, gathered nearly 150 million cumulative streams in under a year. As they averaged over 8 million monthly listeners on Spotify, “High Without Your Love” and“Your Side of the Bed” both leapt past the 40 million-mark, while superstar Joe Jonas lent his inimitable pipes to “Longer Than I Thought.” In between supporting Eric Nam on tour and performing at the ​Hot 100 Festival​, they attracted critical acclaim from the likes of ​Billboard​, ​Idolator​, ​Baeble​, ​Substream​, and many more. Jackson co-produced and co-wrote Zara Larsson’s “Ruin My Life” which recently was certified gold. Additionally, they collaborated with David Guetta and Brooks on the 2019 smash “Better WhenYou’re Gone.”