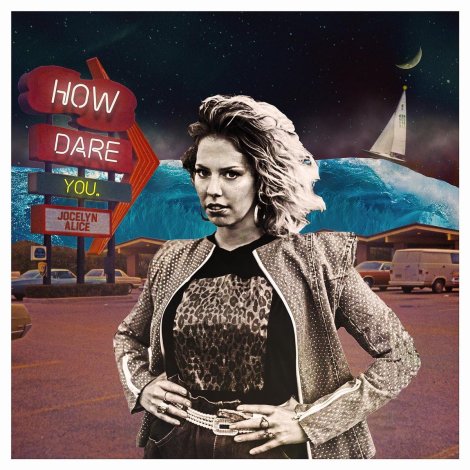 Canadian singer-songwriter and genre-defiant recording artist Jocelyn Alice has announced the release of her brand new, debut full-length album How Dare You., set to launch on November 22 2019. How Dare You. will be released via AWAL – a subsidiary of Kobalt Music offering artists a new alternative to the traditional record label, allowing Jocelyn Alice full creative control and the ability to retain ownership of her master recordings.

How Dare You. is Jocelyn Alice’s follow up to her 2018 EP Little Devil, which featured platinum hit “Jackpot” and gold certified singles “Feels Right” and “Bound to You”. Having amassed over 100 million streams in her career, Alice’s work has been featured on popular hit television shows One Tree Hill and Pretty Little Liars. “Jackpot” earned Alice a 2016 SOCAN Pop/Rock Music Award, and the following year she was awarded a SOCAN #1 Song Award for co-writing Mother Mother’s hit single “The Drugs”.

Three years in the making, How Dare You. is a record that celebrates both vulnerability and independence, and pairs Alice’s incredible vocal ability with her unparalleled talent as a writer. The songs on the album “bridge the gap between having fun and being real. It’s brave to be honest about how lousy you feel”.

Citing sensitivities like social anxiety and panic attacks, Jocelyn Alice considers her ability to tap into painful experiences in her music and live performances an honour, acknowledging that the process of writing the record was at times exceptionally painful. “I never would be able to emote the way I do or connect with an audience if I hadn’t gone through those things”.

Released in late August, the first single off of the album, “Sweetheart” was co-written with Marc Borrero (Meghan Trainor, Backstreet Boys, Jason Derulo), and Louis Schoorl, and is about taking time for yourself and not feeling guilty about it. “It’s about knowing that our relationships become stronger when we have space for ourselves”.

“The Dark”, Alice’s second single off the album, was written and recorded in under an hour with producer and recording artist Mike Sabath (Lizzo, J Balvin, Jonas Brothers). The video for the track has Alice performing the song solo – just her and a microphone, filmed in black and white. “At the end of the day I just want to sit on a stool and sing.” Described by Alice as a song about sadness, “The Dark” is about knowing that true strength and healing comes from feeling.

Prior to the release of the album, Alice will be releasing additional singles which include powerful ballad “Guess I Still Love You”, highlighting Alice’s powerhouse vocal ability; and “Papers”, a tune about contracts with Hello Moth, who co-wrote and produced Alice’s smash hit “Jackpot”.

Sonically the album blends all of Jocelyn Alice’s musical influences, and effortlessly shifts from pop, to reggaeton, to ballads. How Dare You. features numerous song writing and vocal collaborations with artists and producers including: Nefe, Rayelle, Tep No, and Walk off the Earth’s Ryan Marshall.

As an artist who knows what she wants to say and exactly how she wants to say it, Jocelyn Alice shares that the title for the album, How Dare You. came out of a conversation with a close friend. “She just knows me. She knows you can’t tell me what to do. You can try, but it’s not going to work out”.