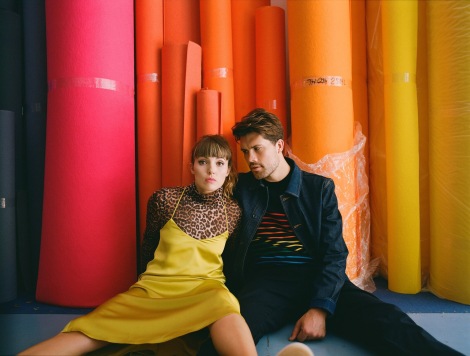 Oh Wonder recently made a magnificent and much welcomed return with their brand new single “Hallelujah.” Today, the duo release a joyous live video, shot in one take, of the band performing the track unplugged with a host of musicians and a choir—watch the video for “Hallelujah” (Unplugged) HERE!


If there has always been more to Oh Wonder than met the eye, “Hallelujah” heralds a newfound clarity in the alt-pop duo. Building from hushed harmonies and beautiful orchestration into breakneck electronics and dizzying pop, it’s easily the most urgent, infectious and anthemic moment of Oh Wonder’s career to date. Written, recorded and produced by Josephine Vander Gucht and Anthony West in their home studio, the song arrived alongside a joyous, one-take video made in collaboration with Gregory Ohrel and Supple Nam. “Hallelujah” announces Oh Wonder’s return in bold, brilliant fashion: no longer DIY pop-stars-in-hiding, but a duo whose musical and emotional alchemy is a timely testament to our purest need to connect.

Of the song, Oh Wonder says, “‘Hallelujah’ is a song of defiance that we wrote for anyone that has ever been told they can’t do something. As music-making teenagers, we were both discouraged by naysayers who declared that we would never be successful, that we weren’t good enough, and that we could never be superstars, so we should just give up. When we met each other, we bonded over our shared experiences of setbacks and near-misses, and set ourselves the highly unrealistic goal of releasing music and touring the world. After two albums and a world tour of 43 countries, we have only recently had a chance to process the last five years. ‘Hallelujah’ is a reminder to ourselves, as much as anyone else, to not care what people think of you, to work hard, be yourself and try your best. It’s our personal anthem of self-acceptance that we hope will encourage others to ‘wear their crowns,’ no matter what anyone else says.”