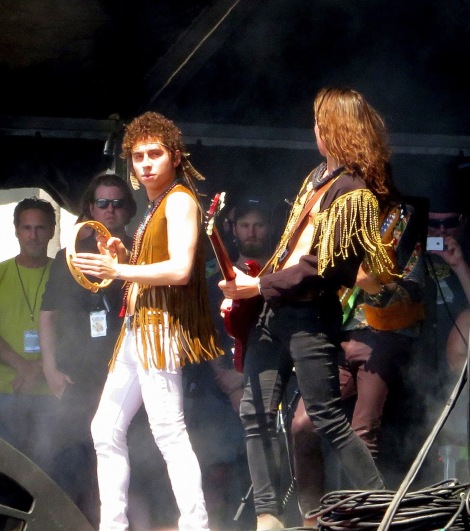 The young Michigan rock band Greta Van Fleet has been making a splash in the music world over the last few years after extensive festival appearances across the nation and around the world. But the band is on the verge of becoming a household name bolstered by their new album “Anthem Of The Peaceful Army” and an upcoming guest appearance on the Saturday Night Live show.

The band formed in Frankenmuth Michigan in 2012 and has quickly made a name for themselves based mainly on their live performances. Vocalist Josh Kizka has been compared in style to legendary Led Zeppelin lead vocalist, Robert Plant. Even Plant, himself has expressed admiration for the band. His brothers, Jake and Sam, play guitar and bass, respectively. The band also features drummer Danny Wagner, who is a multi-instrumentalist wizard. The group may actually sound more like a classic rock blues band along the lines of Janis Joplin and Big Brother and The Holding Company. All comparisons aside it is great to see such a young group keep the hard blues rock tradition alive.

Wagner sat down with me for an interview after one of his recent festival performances to share a little of the band’s roots.

Where is the band from?

Wagner: We grew up in Frankenmuth. It’s about an hour North and West of Detroit. But its quieter than Detroit it’s your classic sleepy mid-western city with curfews. Its a nice supportive, tight-knit community of about 5000 people.

I understand the band grew up listening to vinyl records unusual for your generation.

So who were your early influences, probably a lot of Detroit music?

Wagner: Yeah, of course, the local radio stations would play a lot of Detroit music. Our earliest influences were bands like Grand Funk Railroad, Bob Seger, and Stevie Wonder from Michigan. The other guys grew up listening to Taj Mahal, and a lot of folk like Crosby Stills Nash and Young. All of it was good stuff and then, of course, The Beatles. We all loved the Beatles from an early age.

There is a lot of traditional Blues sounds in your music.

Wagner: Yeah we grew up listening to Howlin Wolf, and we would have CDs of Robert Johnson in the car. The other guy’s dad is a Blues man in his own right. He is a BAD harp player.

You took the name Greta Van Fleet from a local 87-year-old musician who played saxophone and piano in a “dance band” with her three brothers during the late 50s.

Wagner: Yes she is a matriarch of Frankenmuth, an instrumentalist. They actually wrote a song about her some time ago, but I don’t really remember who did it.

So you were sort of like Ringo coming into the Beatles as the strange man out as the rest of your band are real brothers.

Wagner: Yeah it was a lot like Ringo and The Beatles I replaced the drummer, and they said your better you play drums. They tell you that your better but in your own mind you aren’t really sure.

I have heard that you are actually a multi-instrumentalist especially on the albums.

Wagner: Yes I can play Flute, Recorders, Mandolin and in the song Flower Power I play guitar on the record.

So who does the songwriting?

Wagner: It is split evenly %25 percent between the 4 of us. It is all one unit working together. Josh usually writes the lyrics because he is quickest at it, but we all contribute to the music.

You are often compared musically to Led Zeppelin but I actually here more of a band like Janis Joplin and Big Brother and The Holding Company in your music.

Wagner: Well we listened to a lot of Big Brother, but I wish I had time to list all the old blues-rock bands we used to listen to. Everyone has their own perception of the Blues and their own execution of the Blues, and we definitely have huge Blues influences. We are Elvis fans too he had his own version of the Blues.

You have been playing a lot of shows lately. Do ever find it hard to live in the moment?. Paul McCartney likes to stop in the middle of his live performances and says “Give me a moment to take it all in.” Then he looks around at the audience and comments on the signs and sights he sees.

Wagner: He is one of my favorite artists. I am glad you told me that. It’s a whirlpool just constantly moving just constant momentum now. Every tour we go on seems like it is stepping up in every way. It is very surreal sometimes. I will keep that in mind in the future.