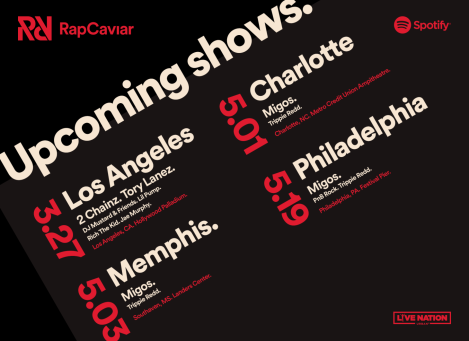 In 2017, Spotify and Live Nation Urban brought some of today’s groundbreaking hip hop artists to their biggest fans through their sold-out concert series RapCaviar Live. To continue the musical momentum in 2018, Spotify’s premiere hip hop show, produced in conjunction with Live Nation Urban, returns for Season Two with 13 shows across the U.S. The four upcoming performances will take place in Los Angeles, Charlotte, Memphis, and Philadelphia, with more dates to be added in the coming weeks.

Produced in partnership with Live Nation Urban, RapCaviar Live is inspired by Spotify’s highly influential flagship hip hop playlist, RapCaviar, which gives listeners an authentic take on what’s hot in hop hop and has since become on of Spotify’s biggest playlists with over 8 million followers.

“We impacted culture with our 2017 Rap Caviar Live music series, and our goal is to elevate in Season 2. We are excited to keep building out this brand with our partners at Spotify” – says Live Nation Urban President, Shawn Gee

The RapCaviar Live concert series launched in August 2017 with a show in Atlanta headlined by Gucci Mane, and has since visited Toronto, Chicago, New York, and Houston. For their Houston concert,Spotify and Live Nation Urban dedicated a week of charitable activities leading up to the concert to benefit local communities affected by Hurricane Harvey. Previous guests who have performed on the tour include Gucci Mane, Lil Uzi Vert, Cardi B, A$AP Mob, Dipset, Playboi Carti, Mike WiLL Made-It, A Boogie Wit Da Hoodie, Trae tha Truth, and more.

Tickets are available now through Ticketmaster.com.

Hip Hop culture is a truly global phenomenon and as Spotify has evolved, it has played an increasingly vital role in growing the culture to unprecedented new heights. With the success of RapCaviar within the US, Spotify and Live Nation Urban plan to expand the RapCaviar brand globally with local curators on the ground in an effort to highlight the power of different genres within the hip hop landscape.

For more on RapCaviar, check out the official Instagram here.