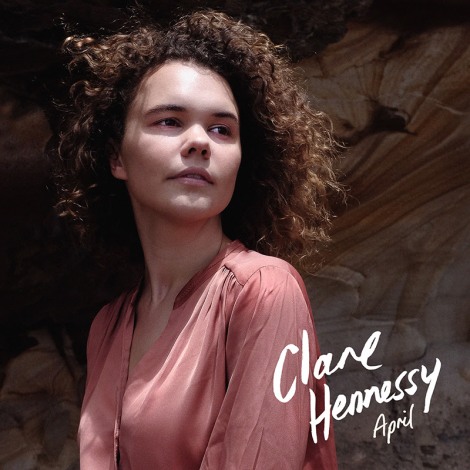 In a world that rejects vulnerability, the most radical thing that musician and writer Clare Hennessy could do was write an album of deeply personal songs. Music helped her to navigate and heal the frayed pockets of her heart; it was only fitting that she might hope to embolden others to do the same.

A bright anthem to echo the triumph of new beginnings, April, the single, muses on transformation. With warm clarity, Clare Hennessy reminds us that when the month is right, taking flight is inevitable. Perfect for high-way driving.

Considering Clare’s childhood listening to Joni Mitchell records, the heartbreaking honesty and nimble vocals of April are no surprise. She draws inspiration too from the warmth of Laura Marling, the grit of Marika Hackman and the guts of Julien Baker. Her voice soars above grit and sometimes considerable darkness with a lightness akin to Katie Noonan.

When asked to summarise the story of the EP, Clare insists that it is largely one to be felt and defined for each individual listener – though there is of course a clear path between each song to her. The take away: despite harshness, barrenness or hardship, there can be beauty. There will be growth. Hope can grow in desolation with love – and “by allowing truth to be heard”.

A trained playwright, stories have always been her lifeblood. It was no wonder then that she channeled this into her music, which has (since childhood) persistently knocked upon her door. April honours this marriage between stories and song, charting her personal coming of age (and, it marks a professional leap, too).

Growing up enchanted by the fantastical competing worlds of Sydney metropolis and rural QLD where her extended family lived, there is a mirroring duality in the music Clare Hennessy creates; heavily influenced by folk and rock authenticity, she has also been ensnared by the world of the less traditional. The tracks of April chart different landmarks along the journey of her becoming, and can be heard as both stand-alone destinations or pit-stops along a larger journey.

Tonally, the musical landscape feels like something between a Spaghetti Western and Twin Peaks – with a healthy helping of witchcraft in the mix. April was produced by Clare along with Nicholas Maitland, with guitar arrangements composed by Ben McCrum and Andy Mason as sound technician. Clare navigates rock, country and folk with a distinctly Australian flair.

The destination: authenticity. Recorded entirely in her bedroom, this musical debut invites us into an interior space in which a heart is thawed out and false identities are abandoned.