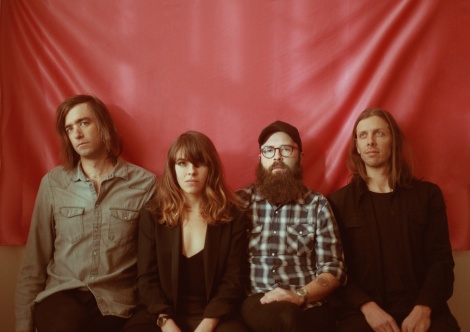 Philadelphia’s Hop Along will release their third studio album Bark Your Head Off, Dog on April 6 on Saddle Creek. Along with CD, cassette, and black vinyl, there is also a tri-color striped vinyl that is limited to 750 copies and sold exclusively on the Saddle Creek Store. On album opener and lead single “How Simple,” Quinlan wrangles with what it’s like to learn about yourself—which can get ugly. The theme carries through to new album track, “Not Abel,” where Quinlan turns the focus outward and sings about the ways other people can be disappointing, relative strangers and biblical figures. “Karl Ove Knausgaard wrote a great book called, “A Time for Everything.” I’d say it inspired a lot of little moments, in this song especially,” shares Quinlan. “At one point he writes about Cain and Abel, but approaches it with a far more intimate, even mundane lens, completely unlike the Bible, which is pretty bare of any personal description. As you spend a few days with them, Cain becomes increasingly sympathetic.  It’s a funny thing trying to examine beliefs. Sympathy and understanding complicate everything too much I suppose.”

The formidable 9-song collection is the band’s strongest and most cohesive album to date. Crafted by Frances Quinlan (songwriter, lead vocalist, and rhythm guitarist), Tyler Long (bass), Joe Reinhart (guitar), and Mark Quinlan (drums), the album considers what it’s like to cast off longheld and misguided perceptions, yet without the assurance of knowing what new ones will replace them. Quinlan has been meditating a lot on power. In this particular moment in history, this thought begs a greater question: what do we do with power and the men who so freely brandish it? “So strange to be shaped by such strange men” is a line that repeats on more than one song on the album. “I’ve been thinking about that a lot. That I just deferred to men throughout my life,” Quinlan says. “But by thinking you’re powerless, you’re really robbing yourself. I’m at a point in my life where I’m saying instead, ‘Well, what can I do?’

Self-produced and recorded at The Headroom in Philadelphia by Reinhart and Kyle Pulley, Bark Your Head Off, Dog features the familiar sounds that have always made the band allergic to genre: grunge, folk, punk, and power pop all appear, with inspiration from ELO to Elvis Costello to ‘70s girl group vocal arrangements. This time around, they’ve added strings, more intricate rhythms, lush harmonies (featuring Thin Lips’ Chrissy Tashjian), along with a momentary visit with a vocoder. In more than one place, Mark Quinlan drums like he’s at a disco with Built to Spill. Bark Your Head Off, Dog is, without question, Hop Along’s most dynamic and textured record yet.