In a world where feel-good buzz words like gratitude and blessings are beginning to lose their luster, Matt Mays is the real deal. A true conductor of the gooey kind of good vibes all the new age kids are searching for. I’m not saying that gratitude is a bad thing or that blessing are for suckers, but I’ve definitely heard a fair number of people throwing those words around like candy and it was really nice to be in an environment where you could feel those words.

The first time I watched Matt Mays play was in Squamish back in 2013. I remember appreciating that he was fully embracing the moment sharing it whole-heartedly with the crowd that had gathered around to watch him. So I really wasn’t all that surprised to find myself surrounded by kind strangers when I went to see him play at the Commodore on January 27th. All with a story of how they first came to hear about the free and sensitive spirit who could energize a crowd. We knew we were lucky to be there that night.

The opening act, Vancouver local Dustin Bentall knew it, too. Dustin opened the show with a Tom Petty cover so I trust him completely. His band joined him for the remainder of the set, a sweet blend of songs that had hints of both vintage country and new age pop. He was dressed the part of a cowboy and with a harmonica rack resting on his shoulders, he had the chops to prove he’s the real deal. Bentall is a legitimate gentleman in his own right and near the end of his set, the singer-songwriter spread his arms and gave a heartfelt thanks to his friend and tour mate. 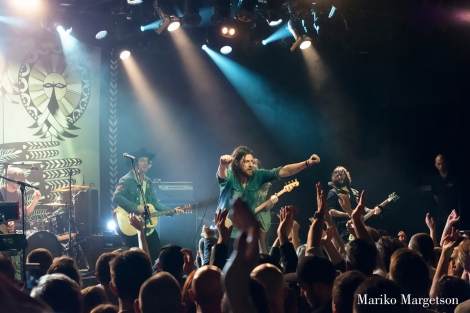 Matt Mays and his crew just surround themselves with the best people on the planet. The kind of people who just lift you up and hold you on a cloud… they just want you to be your best self.

For anyone that wants to dig a little deeper into the groovy happiness you end up feeling at a Matt Mays concert, listen to his newest album, Once upon a Hell of a Time. Tracks like Sentimental Sin and Faint of Heart will give you some insight into the depths the man Sam Roberts calls a vagabond has traveled. Drive On is a tune that will help you understand where he goes to help maintain the positive energy he brings to the stage. They still have the California style classic rock vibe with sensitive overtones of his earlier work, but the subject matter is more personal and less existential as a whole.

The highlight of the evening was probably the anthemic crowd favorite Travellin’ which featured a freakishly marvelous keyboard solo from Leith Fleming. I was kind of feeling the sing-a-long vibe for that one. I also loved singing along to some of his older, rockier tunes like Building a Boat, Tall Trees and Indio.

The energy in the Commodore seemed to build as the evening progressed, with Mays and his band getting more and more enthusiastic with every song. And the energy was contagious. Near the end of the set, we saw a lone crowd surfer make it all the way up onto the stage – a surprise for both the fan and the musicians by the looks of thins.

Matt ended his set with his arms in the air and a declaration of love for the people in the room. And we responded by cheering him on for not one, but two encores. What can I say… there’s just something about Matt Mays that makes you want more of him. 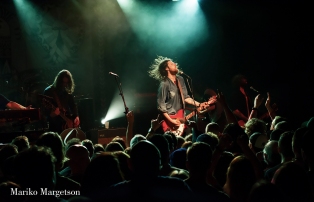