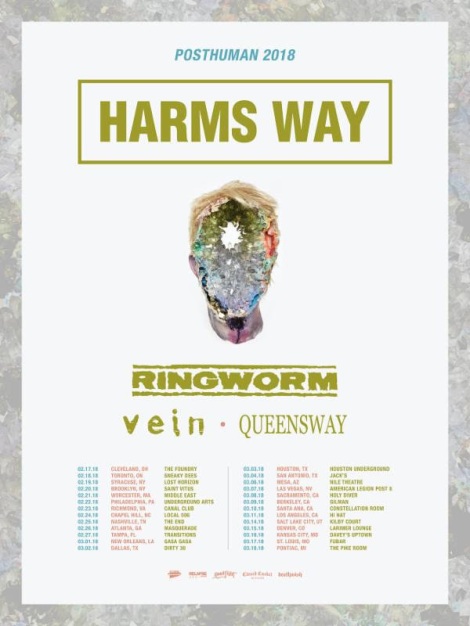 On February 9th, Harm’s Way will release their fourth full-length, Posthuman, via Metal Blade Records. In support of this new album, the band has announced a North American headlining tour with Ringworm, Vein, and Queensway, set to kick off on February 17th in Cleveland, OH. See below for all dates!

Having grown with each subsequent release, Posthuman is a devastating addition to Harm’s Way‘s catalog. “We’ve always stayed true to who we are and allowed the songwriting process to take shape organically from record to record, and as the band has progressed, our sound has become more refined with metal and industrial influences,” states drummer Chris Mills, while guitarist Bo Lueders succinctly sums up what people can expect when they first spin the record: “To a Harm’s Way fan, I would describe ‘Posthuman‘ as a blend of ‘Isolation‘(2011) and ‘Rust‘ (2015), but it’s sonically way more insane. To anyone else, I would simply say it’s full on heavy and full on aggression.”

For a first preview of Posthuman, the single “Human Carrying Capacity” can be streamed at: metalblade.com/harmsway – where the record can also be pre-ordered in the following formats:

With producer Putney overseeing the tracking at Graphic Nature Audio in Belleville, New Jersey, Posthuman came together easily and fluidly. Having three weeks to track it – the longest they have ever spent on a single full-length – was definitely beneficial. “We spent the first three days there doing pre-production and refining the songs to be the best possible versions of themselves,” says Mills. “The amount of time we had in creating this record meant we were able to experiment and not have to rush with any aspect of it, and I feel it shows in the end product.” The title, Posthuman, aptly summarizes the themes of the record, reflecting a sense of not feeling like a part of the world anymore, whether that be politically, socially, ethically, or emotionally. “It very much pulls from ideas of transcendence, progression, and resilience”, Mills elaborates, “and it’s very much a push back on traditional ideas of the self and self-actualization. ‘Posthuman‘ to us is about progressing above and beyond the confines of what is considered human, in the physical, psychological, and categorical sense.”