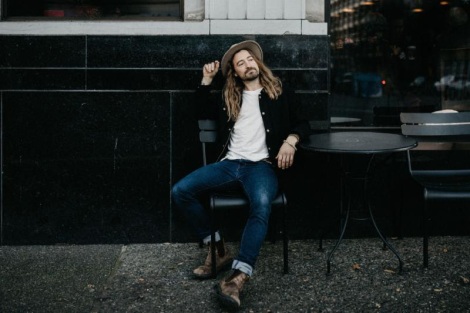 Jesse Roper‘s sound may be rooted in rock and roll’s core elements of blues and soul, but his musical vision is trained squarely on the future. That’s the easiest way to sum up the B.C.-based singer/songwriter and guitarist’s new album Access To Infinity, which will be released on Feb. 2, 2018 via Blue Heron Music. Roper will also be hitting the road in early 2018 supporting Canadian rockers Big Wreck for their In Loving Memory Of tour for 18 North American dates.

Produced by Ian Davenport (July Talk, Band Of Skulls, Supergrass) at Vancouver’s Warehouse Studios, Access To Infinity’s 11 songs encompass the raw riffing on which Roper has built his reputation, combined with a modern take on the psychedelic explorations of Jimi Hendrix and Pink Floyd. In all, it’s the sound that preoccupied Roper‘s mind for the past two years. All he needed was to figure out how to get it on tape. As demonstrated by the primal first single and video, “Cherry,” Roper is ready to take on the world without allowing anything to stand in his way.

“Access To Infinity came from an imaginary interview I was doing in my head one night while out on a walk. The interviewer said, ‘Jesse, what’s it like having all this creativity at your fingertips?’ I responded, ‘Well, it’s kinda like having the Access To Infinity.‘ Woah! I ran home and started writing the title track. This album is my most ‘un-influenced’ piece of writing. I turned off the radio, put away the albums and only made my own sounds for about a year,” said Jesse Roper.

Access To Infinity follows Roper‘s celebrated 2015 album Red Bird, which captured a lot of the fire of his dynamic live show. Roper has shared stages with the likes of soul icon Booker T. Jones, blues belter Beth Hart, and Canada’s own blues institution Colin James. He’s also played festival sets at some of the best western Canada has to offer, including headlining appearances at Rifflandia and Rock the Shores, and talked-about appearances at the Burnaby Blues and Roots Festival and BreakOut West, among others.

The stage is where Roper shines, and he is looking forward to developing his fan base internationally with Access to Infinity, while keeping his native Canada in view. “I’m a very positive person, and I wholeheartedly believe in myself,” he says. “And if I’m not good enough, I’m going to become good enough so I can live this dream.”