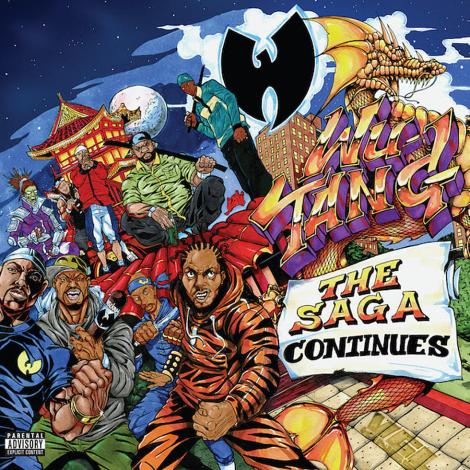 To clear up the confusion, I’ll start this review by saying that there are two distinct and separate Wu-Tang music brands. There are the albums that are canonical, that is, Wu-Tang Clan albums. And there are albums that are non-canonical. That is Wu-Tang albums. No Clan.

There is always excitement and anticipation with either of these brands, but the main thing that separates the two seems to be the amount of involvement on the behalf of Wu-Tang’s RZA.

On canonical Wu-Tang Clan releases, RZA is the man behind the beats. The producer proper. On Wu-Tang releases, he steps back and takes an Executive Producer credit, and lets someone else dream up the bumps and the thumps.

The man behind the beats as far as this album is concerned is the legendary Mathematics or Allah Mathematics. Math’s claim to fame, aside from his beat work, is that he designed the world famous Wu-Tang logo.

On The Saga Continues, Math was tapped by RZA to turn a handful of songs he had set aside for a new Method Man album, into a Wu-Tang album instead.

Now, for me, beyond there being or not being a Clan in the group title, the thing that does not make this a proper Wu-Tang album is that it’s missing two integral members, GZA and U-God. And considering how highly RZA praises GZA’s talents (he recently rated GZA his all-time favourite MC in an interview with the Combat Jack Show), it’s hard to understand why he would slap a Wu-Tang brand on this album at all without GZA’s involvement. But I guess that’s the point of leaving out the Clan part.

Musically, yes, this sounds like Wu. With every Wu release, people want to know one thing and one thing only: does it sound like their old shit? People do not want Wu to change. That was made abundantly clear after Wu released their most recent canonical album A Better Tomorrow, to almost universal disappointment. They want classic mid-90’s era Wu, with raw beats, razor sharp bars and lyrical criminology. They, we, want a return to form from these legendary rappers.

And with that in mind, I can confidently say that The Saga Continues is at best and worst a near miss.

Mathematics said he listened to only two albums while crafting the beats for this album: Wu’s 36 Chambers and Dr. Dre’s The Chronic. He wanted the feel of early, classic Wu, mixed with the sonic brilliance of Dre’s classic Californian hit.

You can definitely hear the influence of both on tracks like ‘Fast and Furious’, ‘Hood Go Bang’ and the albums best joint, ‘People Say’, which could fit easily into the Wu-Tang Forever setlist.

But there are other songs that sound like leftovers from Better Tomorrow. ‘If Time Is Money’ and ‘Pearl Harbour’, the latter featuring a verse from the late Sean Price, sound clunky and uninspired.

And while ‘My Only One’ bangs in the verses, it becomes awkward when trying to fit the hook into the chorus.

There are great songs here though. Most of them featuring Redman, who appears on the album more than any actual Wu member, save maybe Meth. Which isn’t a complaint. The more Red the better, in my opinion.

The Saga isn’t a bad album, but it is certainly a forgettable one. Not unlike the last two non-Clan Wu-Tang releases, Chamber Music and Legendary Weapons. At best it will provide people putting together a Wu-Tang playlist with a few more songs to choose from. At worst, it’s a not entirely unwelcome distraction for the fans who continue to wait for classic Wu to reemerge it’s beastly head, which looks less and less likely to happen as the years go by.